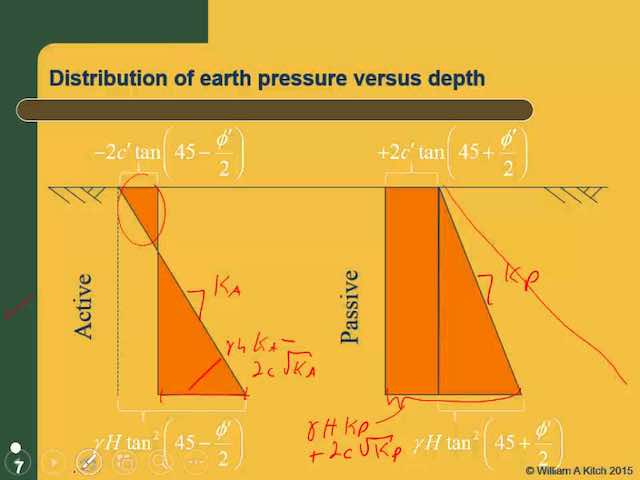 As originally proposed, Rankine's theory is applied to uniform cohesion-less soil only. Later it was extended to include cohesive soil by Bell in 1915.

With these assumptions, we can treat the wedge of soil behind the wall as a free body and evaluate the problem using the principles of statics, as shown in Figure 1a. This is similar to methods used to analyze the stability of earth slopes, and is known as a limit equilibrium analysis, which means that we consider the conditions that would exist if the soil along the base of the failure wedge was about to fail in shear. Weak seams or other non-uniformities in the soil may control the inclination of the critical shear surface. However, if the soil is homogeneous, Pa/b is greatest when this surface is inclined at an angle of 45 + φ/2 degrees from the horizontal, as shown in the Mohr's circle. Thus, this is the most critical angle.

Solving this free body diagram for Pa/b and Va/b gives: 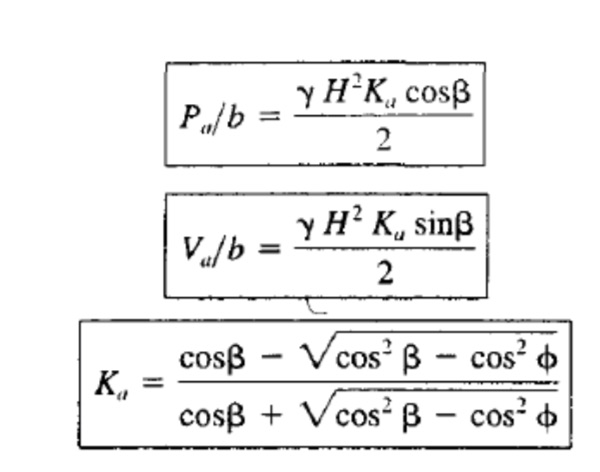 σ = soil pressure imparted on retaining wall from the soil

τ = shear stress imparted on retaining wall from the soil

β = inclination of ground surface above the wall

However, observations and measurements from real retaining structures indicate that the true pressure distribution, as shown in Figure 2, is not triangular. This difference is because of wall deflections, arching, and other factors. The magnitudes of Pa/b and Va/b are approximately correct, but the resultant acts at about 0.40H from the bottom, not 0.33H as predicted by theory (Duncan et al., 1990).

Rankine analyzed the passive condition in a fashion similar to the active condition except that the shear force acting along the base of the wedge now acts in the opposite direction (it always opposes the movement of the wedge) and the free body diagram becomes as shown in Figure 1b. Notice that the failure wedge is much flatter than it was in the active case and the critical angle is now 45 – φ/2 degrees from the horizontal. The normal and shear forces, Pp/b and Vp/b, respectively, acting on the wall in the passive case are: 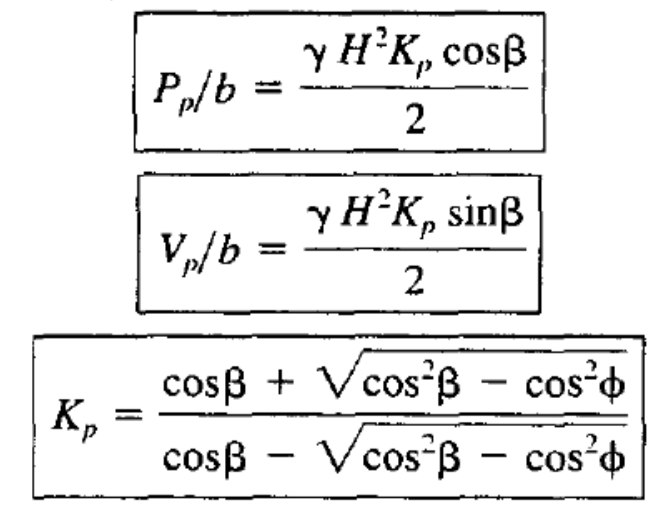 Thank you for the great article. <a href="https://www.lincolnfencecontractor.com/'>fence installation companies omaha ne</a>

Never Heard this Before

Never heard this kind of mathematical theory before. Very complex mathematical theory involving trigonometry. Anyway, thanks for sharing. Also, feel free to visit http://littletonfenceanddeck.com/residential-fence-littleton/ just in case you're looking for experts to take care of your home's residential fencing in Littleton, Colorado.

Awesome presentation. I need to study this to be able to catch up. It has been a long time since I encountered advance math and I just got a little bit rusty now.

Have to do Insect spraying first before studying, don't want mosquitoes biting me tho.

Love to see the proof

tree removal: Every theorem or theory should I say must have a proof. I would like to see the proof of this awesome theory. Surely be a mix of physics and combinatorial mathematics.

Love to see the proof

tree removal: Every theorem or theory should I say must have a proof. I would like to see the proof of this awesome theory. Surely be a mix of physics and combinatorial mathematics.

The Rankine's theory assumes that there is no wall friction , the ground and failure surfaces are straight planes, and that the resultant force acts parallel to the backfill slope.

In case of retaining structures, the earth retained may be filled up earth or natural soil.

Flexing our Roofing services if you need one tho.

Appreciating the persistence you put into your blog and detailed information you provide.

For sure, every civil engineers or civil engineering students know what this theory is all about. Thanks for sharing and explaining the difference between active and passive. Looking forward to more of your post.

On the other hand, please let me know just in case you need contractors to take care of any Wichita Falls concrete foundation work or installation of Allen pool decks for your home needs in Texas.