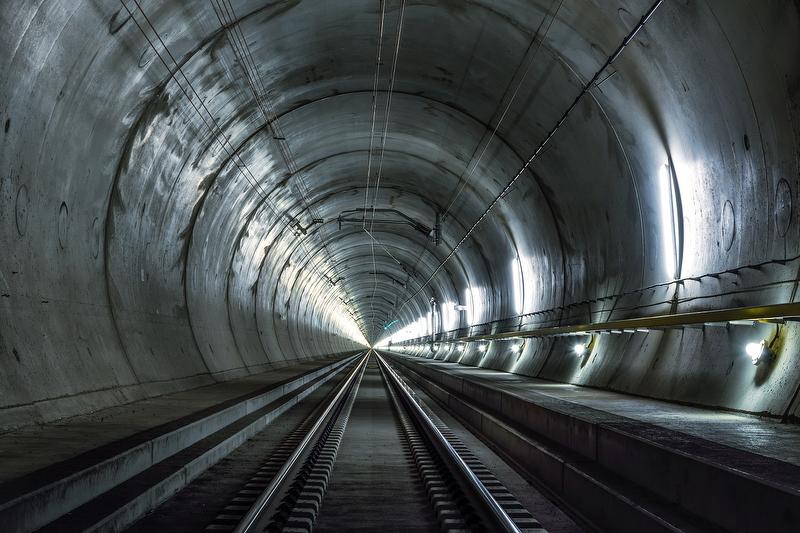 Gotthard Base Tunnel is one of the most extreme engineering projects in World History, to build a 35 miles long tunnel under the Alps Mountains. It is the longest tunnel in the world. This could not be possible without world’s strongest drilling machines, each more than 3 stories high and longer than 4 football fields, drilling 24hrs a day for 6 years. The project costed $7 Billion. Because of its central location in Europe, each year 14 million trucks and cars travel through Switzerland on their way else where, causing traffic jams. An obvious solution could have been to transfer the transportation from roads to trains but the problem was that this mode was also jammed to capacity.

The freight trains were designed to run on a speed of about a 100 miles an hour (double their previous speed), while the passenger trains could travel up to 155 miles an hour. The Swiss people were quite concerned with the environmental implications of the project. First of the public conditions was that the tunnel’s design life should not be less than a 100 years.
The miners had to dig out 24 million tons of rock from the mountains, enough to fill 16 football stadiums.

To minimize the risk the risk of tunnel caving  underground, geologist were tasked to identify collect samples of rocks before drilling could begin.

The tunnel boring machine designed for the Gotthard Base Tunnel could chew away at the hard rock. But if soft rock or unstable material was encountered, the rock was to be drilled and then blasted out. In areas of high pressure water zones and crumbly rock, none of these could be used whereas the dangers increased manifolds.

During initial surveys in 1996, geologists discovered such an area in the path of the proposed tunnel. The cost of stabilizing this area was an extra $600 million. The budget could not be arranged and another half year of drilling deeper down was done to avoid the un-safe zone.

The cheapest tunnel design is the one with two single tracks but it does not provide for emergencies like derailment, crumbling etc. A safer alternative was using three tubes system. One for each direction and a smaller one for evacuation during emergencies. This is the same design that has been used in the English Channel. The smaller central tunnel is connected with the side ones through lateral tunnels. Considering the pros and cons of each design, the single tube was dangerous while the three tubes system was way too expensive, so they decided on a design of two tubes, one for each direction and connected through passageway every 1000 feet. These passageways were to be used in emergency situations. Two crossover points for along with tracks trains were also provided to switch tunnels. During emergencies the computers in the command center will direct the trains to the nearest emergency center, passengers will evacuate the trains and make their way to safety. Massive ventilators were to bring in fresh air and push out the smoke.

Tunneling was done from each direction and even a six inch offset could have required hundreds of meters of re-digging. For greater accuracy, GPS was used for locating the start points, end points as well as three intermediate paths of the proposed route of the tunnel. The location data included latitude, longitude and altitude.

Owing to the massiveness of the job, the engineers entered the mountains at 5 different places for excavation. This approach sped up the process by 6-10 years which could otherwise have taken up to 20 years. All points had its own base camp, complete with concrete factories, water treatment center, living quarters for workers, cafeteria and a mass transit system.

1800 workers were used in the project. For navigating through the mountains’ interior, elevators, trains as well as buses were used. The drilling, digging and blasting continued 24/7 for 12 years using massive tunnel boring machines of 35ft in diameter. The cutter head had 58 blades, each 17’ in diameter and each exerting 26 tons of force. The TBMs worked 130’ of rock in a day.

The TBM costing $21 million was composed of 90,000 parts. A pair of gripper pads press against the tunnel walls and lock the machine in place. The hydraulic arms, pushed against the tunnel walls push the cutter head forward. As the cutter head grinds the rock, the broken rock is guided to be collected on conveyor belt which transport it out of the tunnel. The rock is then taken to concrete processing plants for use.

Behind the cutting wheel, a set of robotic arms drills through the tunnel and ensures that loose rock does not fall. Further behind, another robotic arm sprays shotcrete on each square foot of the inside of the tunnel, which dries within seconds to insure against cavings. After each 7’ advance the grippers are adjusted by the engineers. The TBMs could only dig out hard rocks, The softer ones were either drilled through or blasted off. It is a marvel of tunnel engineering.

Even for blasting of the softer areas inside the mountains, only a regular area was blasted off - 19’ of thick circular rock. Firstly, the drill is aligned using a laser beam, the computers in the machine then calculate rock blast patters. Over 80 holes are drilled up to 19’ into the rock. In these drillings, precisely measured dose of chemicals is filled up along with electrical detonators. A single blast of this size took 8 hours i.e 1 working shift.