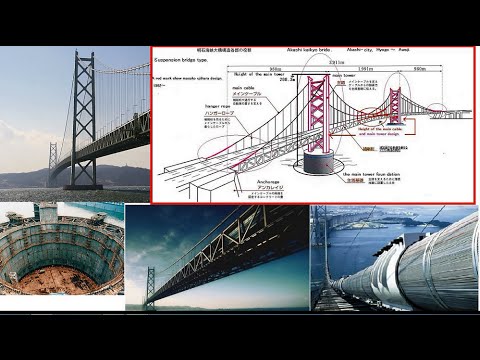 The highest, longest and most expensive suspension bridge on earth, Megastructure Akashi Kaikyo bridge caries a huge 6 line free way linking Kobe with the island of Awaji in to the south. For the people of the fishing villages on rural south island it's a vital link to hospitals, schools and the city on the main land. For Japan it's a symbol of national pride, it is the final linking network of bridges that will unite all four islands. This bridge provides rapid transportation, rapid access and opening up the island of shokoko to business commerce and tourism.

In 1998, Japanese engineers stretched the limits of bridge engineering with the completion of the Akashi Kaikyo Bridge. Currently the longest spanning suspension bridge in the world, the Akashi Kaiko Bridge stretches 12,828 feet across the Akashi Strait to link the city of Kobe with Awaji-shima Island. It would take four Brooklyn Bridges to span the same distance!

The Akashi Kaikyo Bridge isn't just long -- it's also extremely tall. Its two towers, at 928 feet, soar higher than any other bridge towers in the world.

The design features a two-hinged stiffening girder system, which allows the entire structure to endure earthquakes (8.5 on the Richter scale), 286 kph winds, and extreme sea currents. The Akashi-Kaikyo Bridge also has pendulums designed to damp forces. The bridge expands up to 2 meters a day because of heating. It is located at a height of 280 meters and is the highest suspension bridge on earth. Its two towers each stand as tall as 80 story building with a central span just over a mile. It's also the longest suspension bridge in the world nearly twice the length of San Francisco golden gate and at $4.3 billion it's the most expensive bridge ever build.

The Akashi Strait is a busy shipping port, so engineers had to design a bridge that would not block shipping traffic. They also had to consider the weather. Japan experiences some of the worst weathers on the planet. Gale winds whip through the Strait. Rain pours down at a rate of 57 inches per year. Hurricanes, tsunamis, and earthquakes rattle and thrash the island almost annually.

How did the Japanese engineers get around these problems? They supported their bridge with a truss, or complex network of triangular braces, beneath the roadway. The open network of triangles makes the bridge very rigid, but it also allows the wind to blow right through the structure. In addition, engineers placed 20 tuned mass dampers (TMDs) in each tower. The TMDs swing in the opposite direction of the wind sway. So when the wind blows the bridge in one direction, the TMDs sway in the opposite direction, effectively "balancing" the bridge and canceling out the sway. With this design, the Akashi Kaikyo can handle 180-mile-per-hour winds, and it can withstand an earthquake with a magnitude of up to 8.5 on the Richter scale.

Here's how this bridge stacks up against some of the longest-spanning bridges in the world. (Total length, in feet Akashi Kaikyo Bridge 12,828')