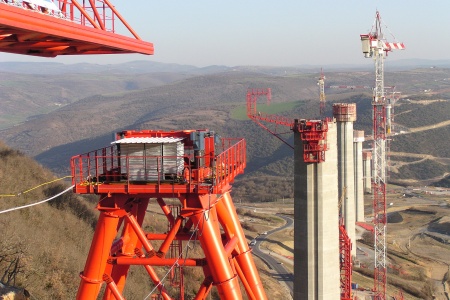 Millau Viaduct multiple span single line cable stayed Bridge the tallest bridge in the world. Its highest tower stretches a staggering 343 meters in height and 2.5 km in length. It is located in southern France, and is the highest bridge in the world. It is a truly amazing piece of engineering, especially considering the method used to span the distance between the piers. Construction cost was approximately €400 million.

The team attempting to build this amazing free way in the sky had to survive landslides, fight winds gusting at a 135 km/h. It’s a bridge that pushed the boundaries of engineering to the limit and then beyond. From the start the construction team faced 3 main challenges.

Oct 2001 the team broke ground they required to build bridge that will last for 120 years. To win the contract the team promised to build it in record time i.e. less than 4 years. Any delay was to cost them 30,000 dollars a day in penalties. There are 7 piers that are numbered from the northern end of the valley. Number one was to cause problems because of steep slope. Number 2 was the tallest across the river number 3 was not much shorter from no. 2. Then 4, 5, 6 and 7 found the genital slope to the south.

16000 tons of steel bars are used. The shape of each pair is complicated as a result each time they removed the section of red steel sheltering they have to change the shape of the mold to fit the profile of the next 4 meter section man handling these steel panels way up to 15 tons of piece is no picnic. And with the combine height of 7 piers totaling well over a kilometer they had to change the shape of the mold over 250 times.

Every 3 days each team on each pair went through this whole cycle then they repeated the process but it was a race against time with the permanent freed of delay keeping the entire build on time. (The budget was the denting responsibility of one man John Pea Matha) Month after month the piers climbed higher finally by November 2003 they reached their full height. At 245 meters pair 2 becomes the highest bridge pier in the world. The piers were exactly on the location where it had to be with 2cm deviation.

Phase 2 of building the world’s tallest bridge involved putting a 2.5 km road weighing 36000 tons on top of the piers and 270 meters above river Tarn. A bridge builder knows danger comes with the territory but working at these heights can be lethal. More than 34 died constructing the New York Brooklyn bridge, 35 died in 1970 on the west gate bridge in Melbourne Australia, 13 workers were killed when Koblenz bridge collapse on 10 November 1971. With these fatalities in mind, the team decided to fabricate the entire rope deck on the safety of solid grounds instead of concrete, steel was used for the deck which in theory would be much safer then lifting concrete sections hundreds of meters in the position. There was only one problem with this plan no one had ever put a rope deck on piers anything like this height before. In the end only one steel manufacturer have the courage to take on this colossal challenge - EIFFEL, the steel firm setup by the French engineer. EIFFEL built Garabit Viaduct Bridge which is one of the world’s largest steel bridge and EIFFEL Tower.

EIFFEL fabricated the massive sections that would make up the road deck in the company steel factories. This immense jigsaw puzzle involved manufacturing 2200 separate sections weighing up to 90 tons and some of them 22 meters long. Their accuracy was measured with laser to within a fraction of a millimeter. The huge square of central spine that should make the deck rigid. The triangular side panel were welded on either side to create width for a 4 lane high way. To meet the punishing schedule Buonoma automated the manufacturing with a two headed welding robot and a plasma cutting machine each cutting pattern or template was programmed in to the computer then the machine automatically blazes its way through the steel.

The torch reached a scorching 28000 degrees centigrade. That’s five times the temperature of the earth’s inner core. But cutting and welding was easy part. The hard part was getting these monster sections hundreds of kilometers from the factory to Millau. The routes were planned with precision to avoid damage. The components were taken to the site where the pieces of the massive jigsaw puzzle were welded together to form the two halves of the deck getting these two halves to span the valley on top of the world’s tallest bridge piers was a major challenge. They planned to slide the entire 2.5 km deck over the piers in two colossal pieces from two sides. The first part was easy fit a pylon so its cables support the front of a deck as it goes out over the valley. Then they constructed temporary steel support towers that halve the span to a more manageable, 171 meters. These steel towers were a construction fear them featen themselves the largest over 170 meter high is the tallest ever build and they needed to carry a massive load.7000 tons as the leading edge of a deck together with the first 90 meter pylon slide over.

Simply pushing this enormous weight over the top of the venerable piers would bring them crashing to the ground. The construction team made a launching system in which they use a series of launching systems to jack up the deck and inch it forward each system uses two wedge shape block on each side of the deck. the upper wedge is pulled forward by hydraulic system its slides up the slope of the lower wedge same time lifting the deck from it supports and advancing it 600 mm. the lower wedge then retracts dropping the deck to its support the upper wedge returns to its original position and the whole cycles begins again. Four of these devices are placed on each piers all programmed to work exactly at a same time. The result is they pick up the entire road way and move it forward. Every 4 minutes the deck advances 6mm across the valley.

On top of the road deck team put up two enormous towers both of them secured by cables and equipment with hydraulics system capable of raising a 1000 tons. Then 700 tons pylon is lifted by hydraulics as it raises it pivots little by little until its vertical. It then lowers safely on to its anchoring point. With all 7 pylons in place the team attached the cables which support the deck with full traffic load. The road way weighs over 40,000 tons and the 154 cables stay prevents it from shagging or collapsing. The strongest stay is made up of 91 individual stayed cables and has a breaking point of 25,000 tons. Finally the road is made over the deck adding 10,000 tons to the total load.