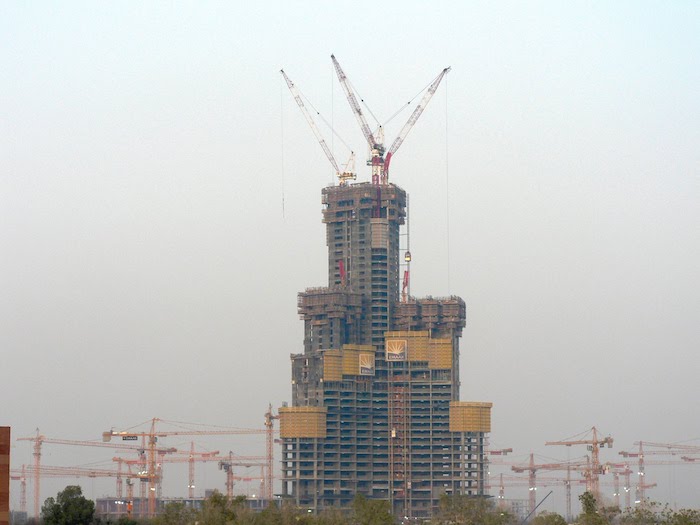 The goal of the Burj Dubai Tower is not simply to be the world's highest building: it's to embody the world's highest aspirations. The superstructure has reached over 165 stories. The final height of the building is 2,717 feet (828 meters). The height of the multi-use skyscraper has "comfortably" exceed the previous record holder, the 509 meter (1671 ft) tall Taipei 101.

The 280,000 m2 (3,000,000 ft2) reinforced concrete multi-use Burj Dubai tower is utilized for retail, a Giorgio Armani Hotel, residential and office. As with all super-tall projects, difficult structural engineering problems needed to be addressed and resolved.

Burj Khalifa has "refuge floors" at 25 to 30 story intervals that are more fire resistant and have separate air supplies in case of emergency. Its reinforced concrete structure makes it stronger than steel-frame skyscrapers.

Designers purposely shaped the structural concrete Burj Dubai - "Y" shaped in plan - to reduce the wind forces on the tower, as well as to keep the structure simple and foster constructibility. The structural system can be described as a "buttressed" core (Figures 1, 2 and 3). Each wing, with its own high performance concrete corridor walls and perimeter columns, buttresses the others via a six-sided central core, or hexagonal hub. The result is a tower that is extremely stiff laterally and torsionally. SOM applied a rigorous geometry to the tower that aligned all the common central core, wall, and column elements.

Each tier of the building sets back in a spiral stepping pattern up the building. The setbacks are organized with the Tower's grid, such that the building stepping is accomplished by aligning columns above with walls below to provide a smooth load path. This allows the construction to proceed without the normal difficulties associated with column transfers.

The setbacks are organized such that the Tower's width changes at each setback. The advantage of the stepping and shaping is to "confuse the wind'1. The wind vortices never get organized because at each new tier the wind encounters a different building shape. The Khalifa's Tower and Podium structures are currently under construction (Figure 3) and the project is scheduled for topping out in 2008.

The context of the Burj Dubai being located in the city of Dubai, UAE, drove the inspiration for the building form to incorporate cultural, historical, and organic influences particular to the region.

The center hexagonal reinforced concrete core walls provide the torsional resistance of the structure similar to a closed tube or axle. The center hexagonal walls are buttressed by the wing walls and hammer head walls which behave as the webs and flanges of a beam to resist the wind shears and moments.

Outriggers at the mechanical floors allow the columns to participate in the lateral load resistance of the structure; hence, all of the vertical concrete is utilized to support both gravity and lateral loads. The wall concrete specified strengths ranged from C80 to C60 cube strength and utilized Portland cement and fly ash. 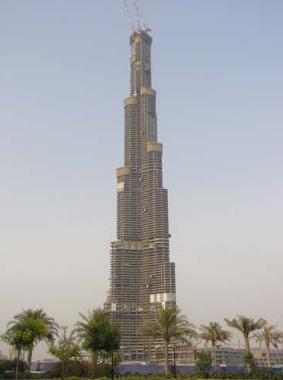 Local aggregates were utilized for the concrete mix design. The C80 concrete for the lower portion of the structure had a specified Young's Elastic Modulus of 43,800 N/mm2 (6,350ksi) at 90 days. The wall and column sizes were optimized using virtual work .' La Grange multiplier methodology which results in a very efficient structure (Baker et ah, 2000).The reinforced concrete structure was designed in accordance with the requirements of ACI 318-02 Building Code Requirements for Structural Concrete.

The five (5) sets of outriggers, distributed up the building, tie all the vertical load carrying elements together, further ensuring uniform gravity stresses: hence, reducing differential creep movements. Since the shrinkage in concrete occurs more quickly in thinner walls or columns, the perimeter column thickness of 600mm (24") matched the typical corridor wall thickness (similar volume to surface ratios) (Figure 5) to ensure the columns and walls will generally shorten at the same rate due to concrete shrinkage.

The top section of the Tower consists of a structural steel spire utilizing a diagonally braced lateral system. The structural steel spire was designed for gravity, wind, seismic and fatigue in accordance with the requirements of AISC Load and Resistance Factor Design Specification for Structural Steel Buildings (1999). The exterior exposed steel is protected with a flame applied aluminum finish. 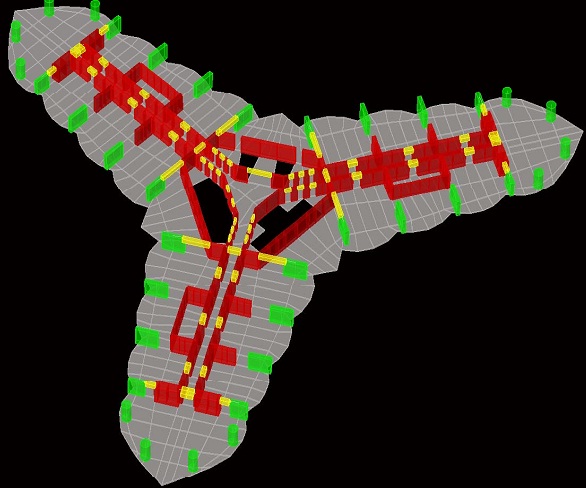 The structure was analyzed for gravity (including P-Delta analysis), wind, and seismic loadings by ETABS version 8.4 (Figure 6). The three-dimensional analysis model consisted of the reinforced concrete walls, link beams, slabs, raft, piles, and the spire structural steel system. The full 3D analysis model consisted of over 73,500 shells and 75,000 nodes. Under lateral wind loading, the building deflections are well below commonly used criteria. The dynamic analysis indicated the first mode is lateral side sway with a period of 11.3 seconds (Figure 7). The second mode is a perpendicular lateral side sway with a period of 10.2 seconds. Torsion is the fifth mode with a period of 4.3 seconds

The Dubai Municipality (DM) specifies Dubai as a UBC97 Zone 2a seismic region (with a seismic zone facior Z = 0.15 and soil profile Sc). The seismic analysis consisted of a site specific response spectra analysis. Seismic loading typically did not govern the design of the reinforced concrete Tower structure. Seismic loading did govern the design of the reinforced concrete Podium buildings and the Tower structural steel spire. 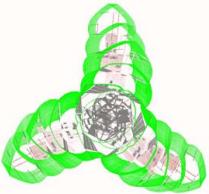 Dr. Max Irvine (with Structural Mechanics & Dynamics Consulting Engineers located in Sydney Australia) developed site specific seismic reports for the project including a seismic hazard analysis. The potential for liquefaction was investigated based on several accepted methods; it was determined that liquefaction is not considered to have any structural implications for the deep seated Tower foundations.

In addition to the standard cube tests, the raft concrete was field tested prior to placement by flow table (Figure 10). L-box, V-Box and temperature. 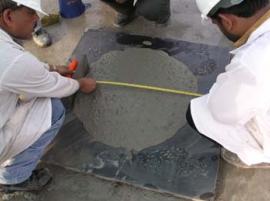 The Tower foundations consist of a pile supported raft. The solid reinforced concrete raft is 3.7 meters (12 ft) thick and was poured utilizing C50 (cube strength) self consolidating concrete (SCC). The raft was constructed in four (4) separate pours (three wings and the center core). Each raft pour occurred over at least a 24 hour period. Reinforcement was typically at 300mm spacing in the raft, and arranged such that every 10lh bar in each direction was omitted, resulting in a series of "pour enhancement strips" throughout the raft at which 600 mm x 600 mm openings at regular intervals facilitated access and concrete placement.

The Burj Tower raft is supported by 194 bored cast-in-place piles. The piles are 1.5 meter in diameter and approximately 43 meters long with a design capacity of 3,000 tonnes each. The Tower pile load test supported over 6,000 tonnes (Figure 12). The C60 (cube strength) SCC concrete was placed by the tremie method utilizing polymer slurry. The friction piles are supported in the naturally cemented calcisiltite conglomeritic calcisiltite fomiations developing an ultimate pile skin friction of 250 to 350 kPa (2.6 to 3.6 tons / ft ). When the rebar cage was placed in the piles, special attention was paid to orient the rebar cage such that the raft bottom rebar could be threaded through the numerous pile rebar cages without interruption, which greatly simplified the raft construction.

The site geotechnical investigation consisted of the following Phases:

A detailed 3D foundation settlement analysis was carried out (by Hyder Consulting Ltd., UK) based on the results of the geotechnical investigation and the pile load test results. It was determined the maximum long-term settlement over time would be about a maximum of 80mm (3.1"). This settlement would be a gradual curvature of the top of grade over the entire large site. When the construction was at Level 135, the average foundation settlement was 30mm (1.2"). The geo-technical studies were peer reviewed by both Mr. Clyde Baker of STS Consultants, Ltd. (Chicago, IL, USA) and by Dr. Harry Poulos of Coffey Geosciences (Sydney, Australia).

The groundwater in which the Burj Dubai substructure is constructed is particularly severe, with chloride concentrations of up to 4.5%, and sulfates of up to 0.6%. The chloride and sulfate concentrations found in the groundwater are even higher than the concentrations in sea water. Accordingly, the primary consideration in designing the piles and raft foundation was durability. The concrete mix for the piles was a 60 MPa mix based on a triple blend with 25% fly ash, 7% silica fume, and a water to cement ratio of 0.32. The concrete was also designed as a fully self consolidating concrete, incorporating a viscosity modifying admixture with a slump flow of 675 +/- 75mm to limit the possibility of defects during construction.

Due to the aggressive conditions present caused by the extremely corrosive ground water, a rigorous program of anti-corrosion measures was required to ensure the durability of the foundations. Measures implemented included specialized waterproofing systems, increased concrete cover, the addition of corrosion inhibitors to the concrete mix. stringent crack control design criteria, and cathodic protection system utilizing titanium mesh (Figure 13) with an impressed current. 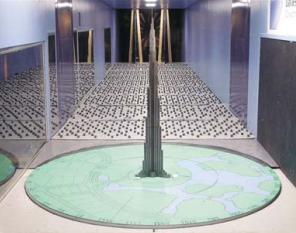 For a building of this height and slenderness, wind forces and the resulting motions in the upper levels become dominant factors in the structural design. An extensive program of wind tunnel tests and other studies were undertaken under the direction of Dr. Peter Irwin of Rowan Williams Davies and Irwin Inc.'s (RWD1) boundary* layer wind tunnels in Guelph. Ontario (Figure 14).