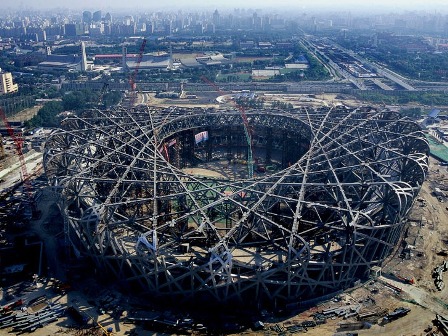 For 2008 Olympics games the vision of international teams of architects and engineers called for an adventure of steel and concrete made with modern techniques. Its steel roof is 320m long and 297m wide. It accommodated 91000 spectators to see 200 countries competing. When Beijing was selected as the venue of 2008 Olympic games, in 2002, Chinese officials announced a global competition for the design of Beijing Olympics stadium.

Swiss architects Herzog & de Meuron also participated in the competition. They wanted to get inside the Chinese way of thinking. They explored the Chinese culture for ideas. They came up with a concept inspired by Chinese art, particularly vases.

In April 2003, Herzog & de Meuron's design was chosen and was named as the Bird's nest. 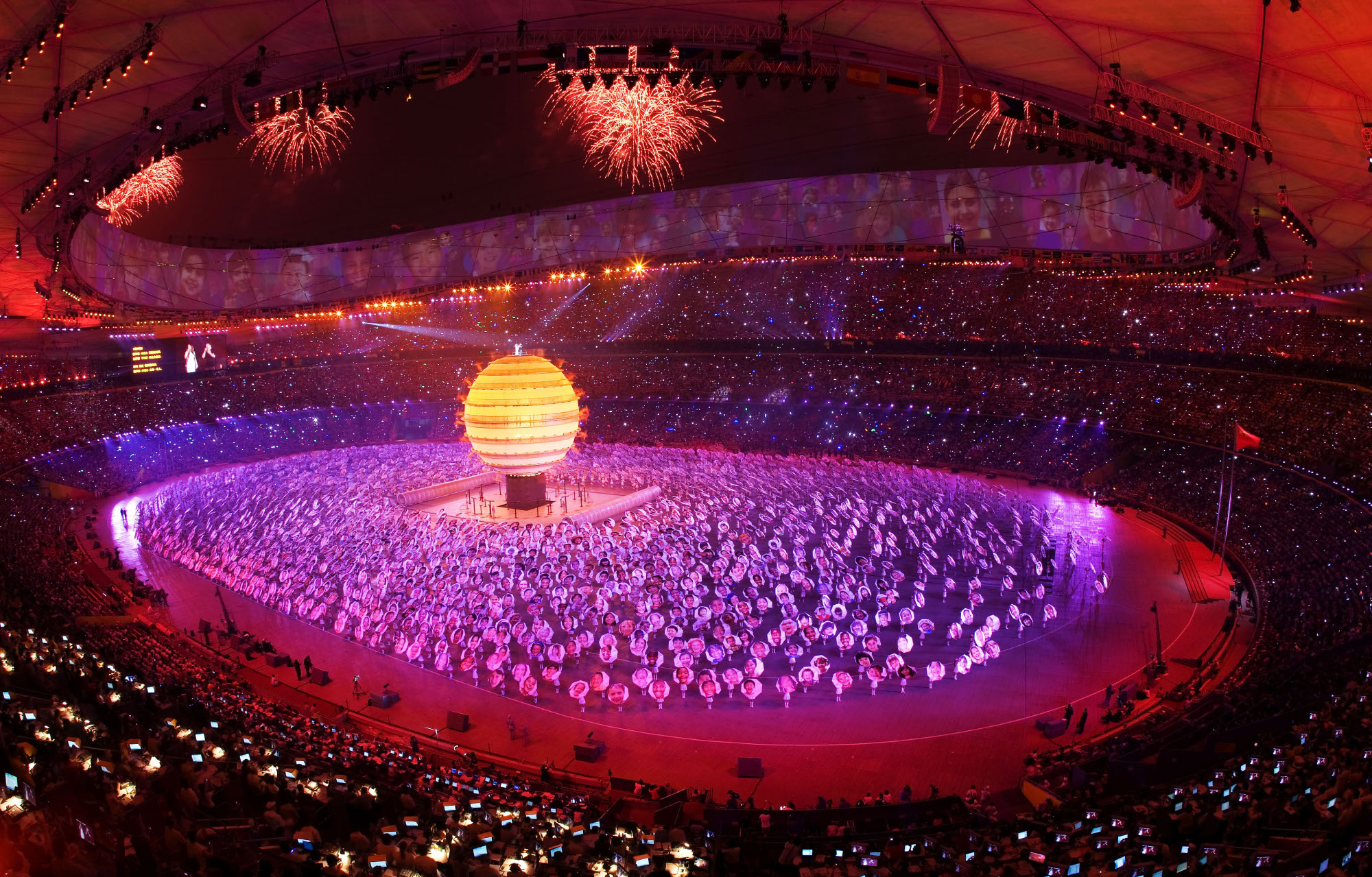 Now the architects faced the challenge of transforming this highly ambitious project into a reality. It has grand curving beams, which criss-cross in an inter cut pattern of woven steel. Its price was estimated to be 250 million pounds. 3000 acres of land was allocated for the Olympic park, surrounding the stadium.

Construction started on 24th Dec, 2003 with a grand breaking ceremony. Within a few months pouring of concrete foundations began.

As China is surrounded by some of the deadliest fault lines, the stadium had to be earthquake proof. The building structure of Beijing Olympics stadium had to pass vigorous seismic tests. J. Parrish was given the responsibility of making the Bird's nest earthquake proof. The immediate problem was that the stadium was so large that it would not shake uniformly altogether with the same frequency. J. Parrish came up withe solution to construct concrete bow in parts, then surround it with metal bow.

Dividing the concrete building structure of Beijing stadium into 6 parts was the key to safety. Being isolated, each part could move flexibly and independently in earthquake so that it could absorb the energy by its free movement, instead of being broken into pieces by this energy. Then it was to be surrounded by metal bow. So that, if in the worst case concrete fails, the steel would be unaffected and would support the structure frame. The structural guidelines of the Olympic committee were also to be met accordingly i.e. the stadium should have giant screens, shops, restaurants, cafes, bars and above all spectacular views of the competitions. Every seat was designed to be as close to the action as possible. No seat was more than 142m from the center of the stadium. 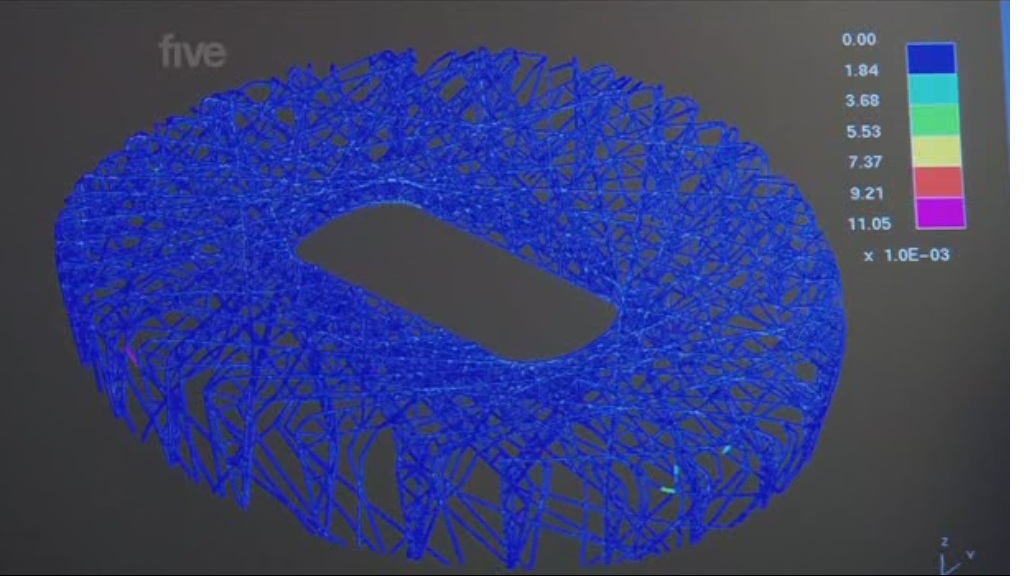 With the design phase completed, work on the concrete bow structure of the stadium began. By May 2003, construction was on the way.

The project faced new problem when the newly constructed airport terminal in France, having the same un-supported roof structure as in Beijing stadium, fell to ground without any warning. The roof of the terminal was designed without any interior supports, sames as the design of the bird's nest. The work on the project came to a halt as Chinese officials reviewed the safety of the stadium. The officials reduced the number of seats, canceled the roof design and recommended a new cheaper and safer design. 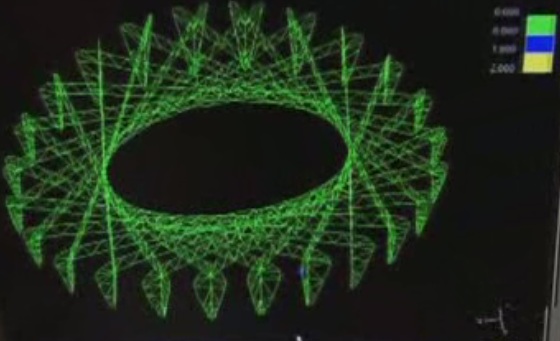 After 5 months the project resumed. The architects had to redesign the stadium as an open air. It made the stadium cheaper and more safer.

Another problem was of the time, too much time had been wasted in the the reviewal process, now more workers were required. Also winter was approaching in which water in concrete could freeze, causing strength reduction problems. 7000 workers were brought in, who would work in 3 shifts. With increased speed of about 1 floor a week, the workers finished concreting in 5 months. The main structure was now ready but the giant steel structure was yet to be made, which made it look like a Bird's nest.

On 28th October, 2005, 1st steel pillar was hoisted. For the rest of the structural design, the architects' plans called for massive steel beams that would twist and turn around the 300m wide stadium. The pattern needed to look random to create the illusion of the Bird's nest. But at the same time, the beams had to support each other and carry the heavy loads safely so that this artistic vision could stand on its own.

Use of CAD in Beijing Olympics Stadium 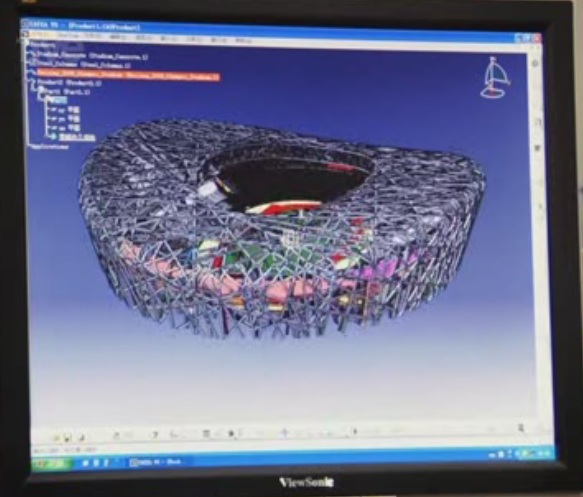 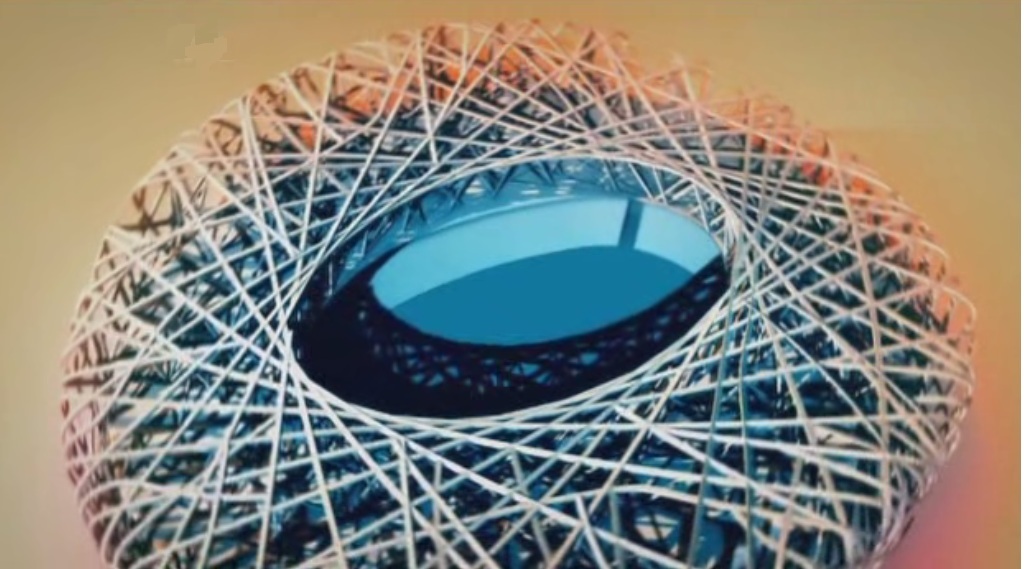 To organize the beams in the required patter, engineers had to build a 3D model of the Beijing stadium using advanced CAD technology. For this purpose, Aerospace software was used. The structure consisted of 24 pillars around the stadium. The pillars were in the form of trusses, encircling the concrete bow. Unlike other concrete structures where skeleton is inside, in this stadium the skeleton was designed to be on the outside of the reinforced concrete structure. A second set of beams filled the spaces between earlier ones. They linked all the beams and held them together to form a braided structure.

A third set of beams supported the stairways and provided a frame for the roof membrane cover. Its main purpose was to fill all the gaps left by the second system.

Before construction could begin, the team had to make sure that the steel had enough strength to bear the loads especially around the curved edges where the steel beams had the twists. The beams start from the floor to the top of the building, bend perpendicularly over the roof and then cross the stadium to bend down again to reach the floor. The length of these beams comes out to be more than 300 meters from one end to the other.

For this highly ambitious beams, the team had to engineer a new, special kind of steel to handle the loads and yet flexible enough to withstand the earthquake shaking.

Computer models of the stadium were developed and shaking load were applied to see the dynamics of the structure. This enabled the engineers to determine the amount of shaking and distress caused in the stadium due to earthquake loads. The flexibility of steel required to withstand the earthquake was determined by these CAD models of the Beijing Stadium. The existing brands of steel did not have the required flexibility so Q460 - a new brand of steel was invented specially for this Project.

This brand was to be manufactured in Shanghai. Many tests were performed On this steel to confirm its strength. But the more complex work of really constructing this steel structure was still left. These steel sections had to be curved, lifted, placed and connected properly to each other. Making curving beams also required engineerity. To bear the loads and create the right aesthetics, engineers came up with the box design. Four steel plates were welded together and bent into the required shape to form a twisted bar section. The trucks carrying Q460 had to cross 6 cities in 5 provinces from Shanghai to Beijing.

On site the workers welded the beams together to form even larger sections, forming a truss, some of the truss formed were up to 12m in length. Each weighed upto 350 tons and were hoisted by 800 ton cranes to the top of the roof. Positioning these heavy structures also required great skill because the pattern was random and the job was just as to fit pieces of jigsaw puzzle together. It was difficult to fit all the parts without any error because in positioning one end the other would go out. This took 2-3 days to weld the joints and secure them in place. As the strength of the structure also depended now on welds, so for welding of the special steel, over 1000 skilled workers were trained. Welding the Beijing stadium was a hard, dangerous and slow job. Q460 proved to be a hard steel and required temperatures higher than common steel for welding. About 320 km length of welds were to be made.

Some ends were left open and un-welded to allow for temperature changes during construction. Temperature in Beijing ranges from -20 - 30°C. When the temperature rises, so does the Bird's nest and when it drops, the Bird's nest also settles down. The open joints were to be welded in a weather neither too hot, nor too cold. So the nights of summer were selected for the job and 400 workers took part in the job at night shift. August 31, 2006, the workers finished the welding. 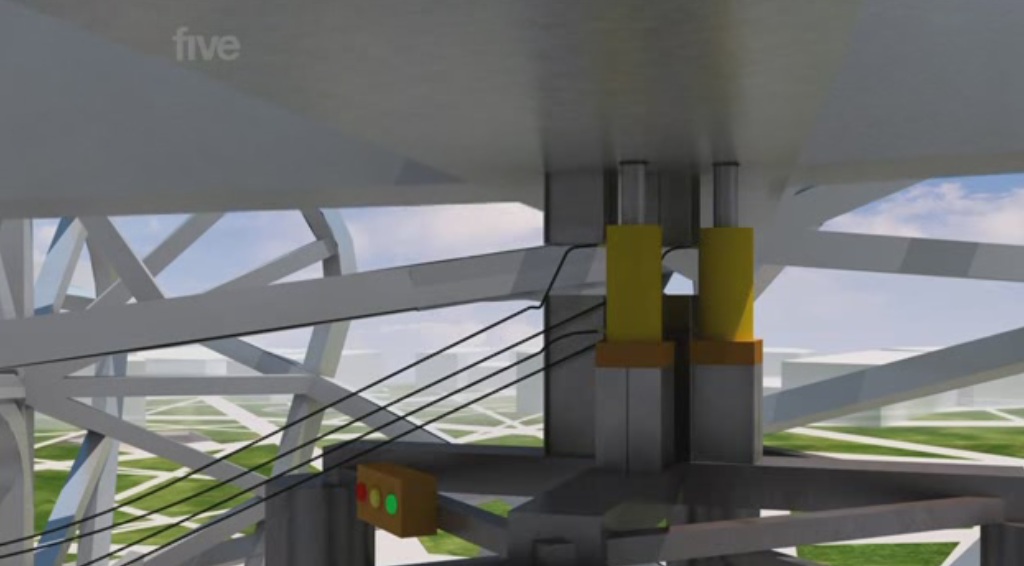 Now the form work and other supporting structure were to be removed which held the beams in place. Until then the building was standing on 78 supporting columns. These columns were evenly spaced below the structure and were subjected to 42000 tons of steel load. The unloading was to start in Sept, 2006.

To remove the columns from beneath the roof, hydraulic jacks were used. These jacks would first support the roof, the columns would be removed and the load would transfer to the jacks which would eventually lower, allowing the structure to support its own weight.

According to calculations, the roof had to settle up-to 30cm and it did so after the supports were removed. Still they had to wait to see any further sinking or cracking. If so, it would mean that serious damage would occur. In full 1 week all of the supports were removed. The frame was finally standing on its own on Sept, 17, 2007. Still the structure was just a hollow steel structure. It had to be furnished and fabricated to be an Olympic stadium. Flouro-Carbon polymer transparent sheets were used to fill up the spaces between the steel structural members.