Known as the Beijing Water Cube, the National Aquatic Centre is the site of the aquatic games at the 2008 Summer Olympics in Beijing, China.

The National Aquatic Centre, or Water Cube, sets next to Beijing National Stadium in the Olympic Green. The cube-shaped Aquatic Centre is a steel frame covered with a membrane composed of energy-efficient ETFE, a plastic-like material. The design of the Water Cube is based on the patterns of cells and soap bubbles. ETFE pillows create a bubble effect. The bubbles collect solar energy and help heat the swimming pools.

In July 2003, the Water Cube design was chosen from 10 proposals in an international architectural competition for the aquatic center project. The Water Cube was specially designed and built by a consortium made up of PTW Architects (an Australian architecture firm), Arup international engineering group, CSCEC (China State Construction Engineering Corporation), and CCDI (China Construction Design International) of Shanghai. The Water Cube's design was initiated by a team effort: the Chinese partners felt a square was more symbolic to Chinese culture and its relationship to the Bird's Nest stadium, while the Sydney based partners came up with the idea of covering the 'cube' with bubbles, symbolizing water. Hence symbolically the water cube references Chinese symbolic architecture.

Comprising of a steel space frame, it is the largest ETFE clad structure in the world with over 100,000 m² of ETFE pillows that are only 0.2 mm (1/125 of an inch) in total thickness. The ETFE cladding allows more light and heat penetration than traditional glass, resulting in a 30% decrease in energy costs. 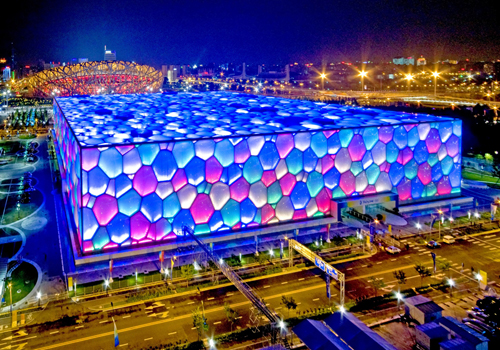 The outer wall is based on the Weaire–Phelan structure, a structure devised from the natural formation of bubbles in soap lather.  The complex Weaire–Phelan pattern was developed by slicing through bubbles in soap foam, resulting in more irregular, organic patterns than foam bubble structures proposed earlier by the scientist Kelvin. Using the Weaire–Phelan geometry, the Water Cube's exterior cladding is made of 4,000 ETFE bubbles, some as large as 9.14 meters (30.0 ft) across, with seven different sizes for the roof and 15 for the walls.

Facts about the National Aquatic Centre:

Designed for swimming and diving

Beijing’s famous Water Cube, or National Aquatics Center, the place where two dozen world records were set during the 2008 Summer Olympics (and where swimming sensation Michael Phelps landed eight gold medals) has been converted into a water park -- or at least half of it has.

Nearly a year in the making and with a price tag of around RMB 350 million (about US$51 million), the splash-tastic “Happy Magic Water Cube, Beijing Water Cube Water Park,” as the translated Chinese sign near the entrance says, opened its doors to the public on August 8.

Located next to the Bird’s Nest, or Olympic Stadium, the aquatics center, famous for its plastic blue bubble-wrapped exterior, had been closed since last summer for the renovations. Its opening coincided with the second anniversary of the 2008 Olympics. The water park, which takes up about half of the 12,000-square-meter complex and, according to state media, is now the largest in Asia, features a wave pool, lazy river, spa area and 13 water slides and rides, including the Bullet Bowl, Speed Slide and Tornado

A couple thousand visitors arrived for opening day, forking over a hefty RMB 200 for a ticket (children can get in for RMB 160), Xinhua reports. Interest had not waned on the day CNNGo paid a visit as thousands of mostly Chinese visitors arrived toting rafts and dressed in swim attire (rafts, swimsuits, towels and goggles are all on sale for those who forgot to bring them.

Bags and clothing can be stored in lockers that are located alongside changing rooms and showers outside the water world’s entrance on the ground floor. Renting a locker costs RMB 100, with RMB 80 given back when the rubber bracelets that open the lockers are returned.