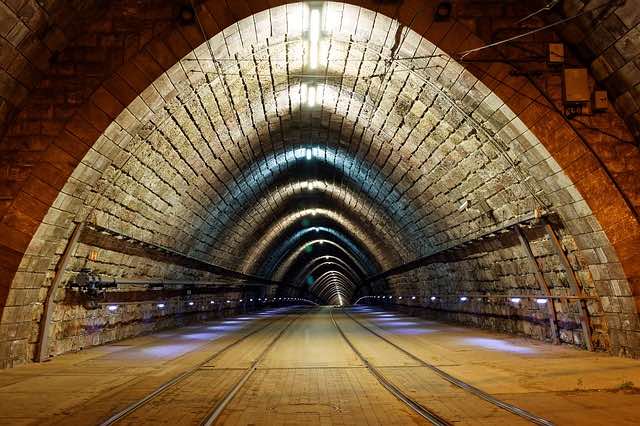 Tunnel, passage, gallery, or roadway beneath the ground or underwater. Tunnels are used for highway traffic, railways, and subways; to transport water, sewage, oil, and gas; to divert rivers around dam sites while the dam is being built; and for military and civil-defense purposes. Subterranean galleries are a series of horizontal passageways on different levels, as in a mine. Construction sites of powerhouses, blasted out of solid rock near dams, are also in the tunnel category.

Tunneling machines, sometimes called moles, make an initial cut into rock with a cutter-head. Individual disc-shaped cutters are set into the face of a powerful, rotating head, which may be more than 5.5 m (18 ft) in diameter. As the machine bores through rock, conveyor belts transport rock particles, and any other refuse away from the head. Concrete segments are erected to line and protect the tunnel as each area is hollowed out. The segments also offer a firm surface for the machine to grip as it continues through the rock, sometimes at rates of more than 5 m (16.4 ft) an hour.

The building of a tunnel is known as driving a tunnel and involves advancing the passageway by blasting or boring and excavating. Tunnels through mountains or underwater are usually worked from the two opposite ends, or faces, of the passage. In the construction of a very long tunnel, vertical shafts may be dug at convenient intervals to excavate from more than two points. Improved boring and drilling machinery now allow a tunnel to be driven four or five times faster than was possible with older techniques.

The rock drill that is driven by compressed air has helped most in reducing the time of tunnelling in recent years. A number of these drills may be positioned on wheeled vehicles, called jumbos, and rolled to the face of the tunnel. Many holes are then drilled concurrently in predetermined places on the rock face. Blasting material is inserted into the holes, the area cleared, and the explosives detonated. Broken rock is then removed and the process repeated.

Another recently developed tunneling machine is the mole, a long machine with a circular cutting head that rotates against the face of the tunnel. Attached to the cutting head is a series of steel disc cutters that gouge out the rock on the face as the machine rotates and is pushed forwards by hydraulic power. Moles provide several advantages over drilling and blasting. The tunnel can be bored to the exact size desired, with smooth walls, thus eliminating the condition called overbreak, which results when explosives tear away too much rock. The use of moles also eliminates blasting accidents, noise, and earth shocks. Workers are less troubled by fumes and noxious gases and can clear away broken rock without stopping for blasting intervals. A mole can advance about 76 m (250 ft) a day, depending on the diameter of the tunnel and the type of rock being bored.

Despite these advantages, moles have some drawbacks. They are very costly, and the cutting head must be the same diameter as that required for the tunnel. They are useless in soft ground and mud, which collapse as soon as the machine digs in, and, until recent years, when improved cutting surfaces came into use, extremely hard rock quickly wore out cutting discs.

In addition to blasting and boring machines, several other methods are used to dig tunnels. The cut-and-cover method involves digging a trench; building the concrete floor, walls, and ceiling, or installing pre-cast tunnel sections; and then refilling the trench over the tunnel. This method is not usually chosen for building tunnels in built-up areas in cities. In soft earth or mud, a large-diameter pipe-like device can be driven through the ground by jacks or compressed air. Workers remove the earth as the pipe moves forwards, its edge cutting into the earth. Underwater sunken tube tunnels, such as the Baltimore Harbor Tunnel in the United States, have been built by fabricating short tunnel sections in a trench in the riverbed or seafloor. Each section, after sinking, is attached by oversized bolts to the previously sunk section in line. Heavy, thick concrete walls prevent the tunnel from floating.

Another method of underwater tunnel construction uses a caisson, or watertight chamber, made of wood, concrete, or steel. The caisson acts as a shell for the building of a foundation. The choice of one of three types of caissons, the box caisson, the open caisson, or the pneumatic caisson, depends on the consistency of the earth and the circumstances of construction. Difficult conditions generally require the use of the pneumatic caisson, in which compressed air is used to force water out of the working chamber.

New tunneling techniques have not eliminated all the hazards of tunnel digging. Water, sometimes as much as 72,000 liters (about 19,000 gal) a minute, can pour into tunnels not yet lined with concrete or plastic sealers. The water, which must be pumped out continuously, inconveniences workers, causes tunnel roofs and walls to collapse, damages equipment, and causes delays in digging. In recent tunnel projects, attempts have been made to freeze the tunnel area before blasting or digging to prevent flooding before the walls can be sealed and lined. With the exception of some water and sewer tunnels, in which water seepage is not a problem, most tunnels are lined permanently with wood, concrete, or steel, or a combination of the three.

Dust from blasting is another serious hazard, causing illness among workers and delay in digging. A machine that sprays a fine curtain of water to settle the dust following a blast has recently been used. Despite extensive safety precautions, accidents in tunneling are common, such as a blasting accident in Japan in 1960, which killed 22 workers.

Famous Tunnels of the World

Chesapeake Bay features a piece of construction that may startle unprepared travelers. The 28.2-km (17.5-mi) crossing between Norfolk and Cape Charles, Virginia, begins as a bridge, but disappears into the water midway. A combination structure, the Chesapeake Bay Bridge-Tunnel combines two bridges with two tunnels that pass under major shipping channels.