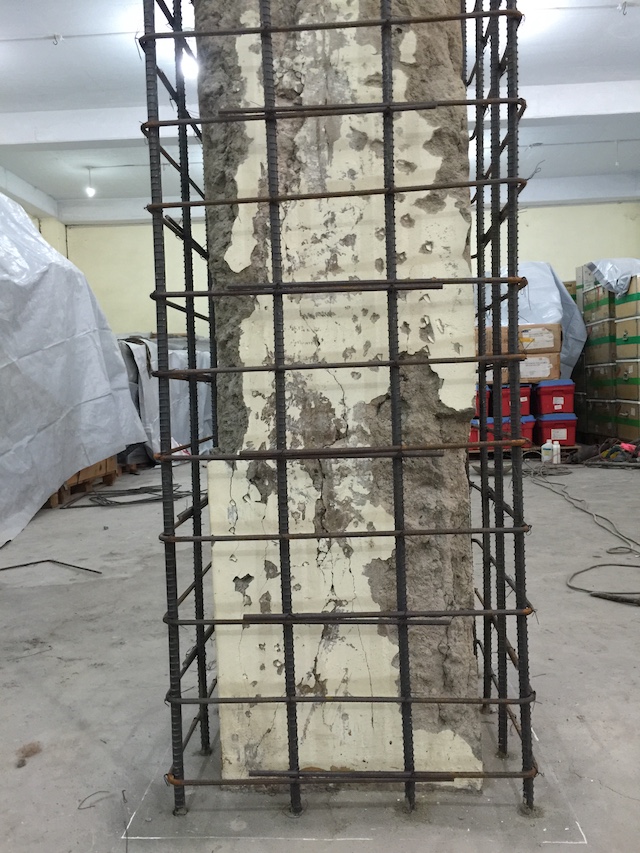 Primary aim of strengthening a structure is to increase its load bearing capacity with respect to its previous condition. Only those aspects related to flexure are discussed here. Established techniques which have been in use successfully for a number of years are recognized as follows:

In this technique, a plain or reinforced concrete slab is overlaid on top of the existing slabs or beams to increase the section dimension in order to increase flexural strength. To ensure the composite action between the two, dowels or shear studs may be installed. This method in particular may be advantageous when the member needing strengthening possesses reinforcement near or equal to balanced steel. However, as the flexural strength of a reinforced concrete member is usually limited by the capacity of the reinforcement rather than by the capacity of the concrete, over-slabbing may therefore, be of no significant value. Any strength increase may be offset by the increase in dead load.

"DRITSOS ET AL" has concluded that the chances of interface failure are increased when the existing beam is over-reinforced and the depth of the overlay is too deep. This observation further limits the scope of its use. Apart from disruption to use of the structure, extensive surface preparation is required.

Sprayed concrete is a mixture of cement, aggregates and water which is projected into place at high velocity from nozzle. Many names have been associated with sprayed concrete including spray concrete, shotcrete and gunite. In the USA the "American Concrete Institute" described shotcrete as "mortar or concrete conveyed through a hose and pneumatically projected at high velocity onto a surface". In the UK Gunite is referred to "sprayed concrete where the aggregate size is less than 10mm, and where the size of aggregate exceeds 10mm, it is termed as shotcrete".

Strengthening of beams deficient in flexure is accompanied by addition of reinforcing steel in the tensile zone. The method is, therefore, sometimes referred to as tensile overlay. The method essentially requires removal of concrete cover, cutting recesses if necessary to accommodate additional bars, either by providing sufficient anchorage length in the concrete, or by steel plates and bolts with anchoring yokes. Once the whole system is in place concrete is sprayed to the desired thickness. It is essential to have a satisfactory bond between existing and new concretes as the evaluation of new concrete section is based on the same principles as those of normal reinforced concrete. Apart from the capability of the joint to transfer shear stresses without relative movement, differences in creep and shrinkage properties of old and new concrete need careful evaluation. It is reported that most shotcrete durability failures do not involve failures of the material itself, but generally there is a peeling off sound shotcrete because of bond failure. The Department of Transport suggested the use of sprayed concrete where the reinforcement is not too congested.

This method of strengthening which materialized with the development of epoxy resin is about 39 years old and is now used in almost all parts of the world. In this method of enhancing flexural capacity, mild steel plates are bonded to the soffit of the beam by an epoxy adhesive. There is practically no increase in depth of member or in its dead weight. The method is versatile, flexible, economical and expedient. The behavior of resulting composite system largely depends on the inter-layer bond between concrete and plate. The thickness of the plate needs special attention on relatively thick plates can initiate horizontal cracking and plate separation.

With increase width, there is a risk of defects in adhesive, and with increasing thickness of the adhesive; the slip between the reinforcing element and concrete becomes greater. Anchor plates are needed where the width-thickness ratio of the plate is less than 50:1 due to production of high stresses near the ends of the plates leading to premature failure. The technique cannot be used where the member shows any sign of reinforcement corrosion.

External Pre-stressing is defined as pre-stress produced by cables which are placed outside the structure over a great part their length and which, except at the deviators and at anchorage zones has no relation the shape of the concrete structure.

The advantages over plate bonding technique include:

Recent developments in the field of plastics and composites have resulted in the manufacturing of high strength fiber reinforced plastics (FRP), with strength and fatigue properties higher than those of steel. The fiber could be glass fiber, aramid fiber or carbon fiber.

If two dissimilar materials which have to have composite action are to be used structurally, it is necessary for designer to have a thorough understanding of the mechanical and service material properties of the components, the method of joining, the composite action and failure mechanism and overall structural analysis of these systems.

Glass, aramid and carbon fiber composites may be considered for strengthening applications with particular regard to plate bonding. A comparison of the important characteristics of an FRP produced from these fiber types is shown in "Table 6.1", in which the fiber fraction volume is typically around 65% and the fibers are unidirectional aligned.

Two primary methods are used to attach FRP composite materials to concrete structures (and to masonry, timber, and even metallic structures) for "retrofitting" purposes.

One method employs per-manufactured rigid FRP strips (approximately 4 in. (100 mm) wide and in. (1.6 mm) thick) that are adhesively bonded to the surface of the structural member.

The other method, known as "hand lay up", consists of in situ forming of the FRP composite on the surface of the structural member using flexible dry fiber fabrics or sheets of width approximately 6 to 60 in. (150 to 1500 mm) and liquid polymers.

In recent years a new variant of the pre-manufactured strip method called Near Surface Mounting (NSM) has been developed (Refer Figure 6.1). In this method, a thin, narrow FRP strip (3 by 18 mm) or small-diameter round FRP bar (6 mm) is inserted and then bonded adhesively into a machined groove at the surface of the concrete member. (Refer Figure 6.2) FRP retrofitting has been used with bridge and building structures to strengthen static and quasi-static loads (such as increases in dead or live load in a bridge or building structure), and for dynamic loads (such as strengthening for improved seismic or blast response in a bridge or building structure). FRP composites have been used successfully for flexural strengthening of concrete beams and slabs, shear strengthening of concrete beams, and axial strengthening and ductility enhancement of concrete columns.

All structural problems have more than one technical solution, and final selection will ultimately rest upon an economic evaluation of the alternatives. Enlightened clients will ensure that this evaluation includes of the total cost that will be incurred during the minimum initial cost. The potential advantages of FRP composites plate bonding are as follows:

Weight of Plates: The density of FRP composite plates is only 20% of the density of steel. Thus composite plates may be less than 10% of the steel weight with same ultimate strength. Apart from transport costs, biggest saving arising from this is during installation. Composite plates do not require extensive jacking and support system to move and hold in place. The adhesive alone will support the plate until curing has taken place. In contrast, fixing of steel plates constitutes a significant proportion of the works costs.

Versatile Design of Systems: Composite plates are of unlimited length, may be fixed in layers to suit in two directions may be accommodated by varying the adhesive thickness.

Reduced Mechanical Fixing: Composite plates are much thinner than steel plates of equivalent capacity. This reduces peeling effects at the ends of the plates and thus reduces the likelihood of a need for end fixing. The overall depth of the strengthening scheme is reduced, increasing head-room and improving appearance.

Durability of Strengthening System: There is the possibility of corrosion on the bonded face of steel plates, particularly if the concrete to which they are fixed is cracked or chloride contaminated. This could reduce the long term bond. Composite plates do not suffer from such deterioration.

Improved Fire Resistance: Composite plates are a low conductor of heat when compared to steel, thus reducing the effect fire has on the underlying adhesives. The itself chars rather than burns and the system thus remain effective for a much longer period than steel plate bonding.

Maintenance of Strengthening System: Steel plates require maintenance and painting and access costs as well as the works costs. Composites plates will not require such maintenance, reducing the whole life cost of this system.

Ability to Pre Stress: The ability to pre-stress composites opens up a whole new range of applications for plate bonding. The plate bonding may be used to replace lost pre-stress and shear capacity of the section be increased by the longitudinal stresses induced. Formation of cracks be inhibited and the serviceability of the structure enhanced. Strengthening of materials such as cast iron also becomes more practicable.

Ferro cement is said to be the first form of reinforced concrete. Ferro cement is the type of reinforced concrete which uses wire mesh rather than heavy rods and bars as the primary part of its metal reinforcement, and uses sand and cement mortar rather than a mixture of cement, sand and gravel as the primary part of its concrete mixture. Cement and sand mortar having a ratio of 1:2 is impregnated in the mesh reinforcement either by hand or by shotcrete to produce almost a fabric of steel packed and coated with mortar.

Although there are many obstacles to the greater use of ductility is attracting researchers to exploit its potential. Ferro cement have no apparent advantage over any other type of reinforced concrete either in direct tension or flexure, but it has a high level of control over cracking provided by the close spacing and specific surface area of the wire reinforcing mesh.

Waliuddin and Rafeeqi through an experimental study have indicated a possibility of confining concrete with Ferro cement to enhance the capacity of columns and to strengthen other concrete structures. Remualdi showed that Ferrocement has the ability to retain its structural integrity through relatively large strains, has excellent crack control and remarkable ductility, which makes it a choice for use as a strengthening material. All these studies have shown that the strengthened beams have shown superior crack control, enhanced flexural strength and enhanced ductility.