Distance is measured by mechanical devices (chain or steel tape) or by electronic means.

The chain tape is also referred to as the Günter’s chain. Gunter’s chain, the 300 –year-old measuring instrument by which all survey measurement in the English – speaking countries and much of it elsewhere was done. It has been superseded by the steel tape and electronic equipment. Gunter’s chain is 66 feet long; 80 chain equal to one mile, and 10 square chains equals an acre. The chain is subdivided into 100 links. A rod or perch was 25 links. Each link was a short section of wire connected to the next by a loop. At each end of the chain was a brass handle. The 66 – foot unit is still called a chain and is still in use in property descriptions and in the public land system. The Gunter chain is generally used in taking short and detailed length and breadth of a school farmstead. 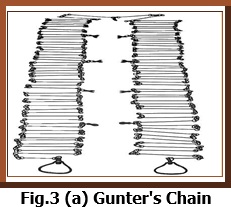 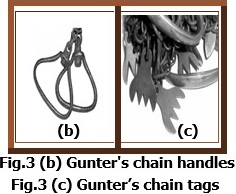 A graduated steel ribbon, or a flat wire, with handles at each. It is a basic modern means of measuring distance. Its length is taken as a straight line distance between the two end marks at 68°F (20°C) because the tape actual length varies with different types of suppose different tensions, and different temperatures. In the port, the tension, the temperature and the difference in height of the two end marks are recorded and the measured length corrected accordingly.

In most routine surveys, the tape is held at hand at the end, kept high enough to clear ground objects, made horizontal by estimation, and placed in the direction of measurement. The desired tension is estimated, and the positions of graduations are brought to the ground marks by plumb bobs. Sometimes the air temperatures are recorded. For higher accuracy, tripods or other supports are employed, or the tape is fully supported on smooth surfaces. The shops and temperature of the tape are determined. Then, the tension is regulated with a spring balance.

When especially accurate measurements are necessary, particularly for base lines in a triangulation system, a steel tape must be used at night or when the sky is over cast, otherwise radiant heat will make it impossible to determine tape temperature. Tapes made of invar avoid this difficulty. Invar is a steel alloy with an extremely low coefficient of thermal expansion (about Fahrenheit). With such a tape, a temperature difference of 10°F (5.6°C) from the design temperature would result in an error of only about 1/20 of an inch (1.3 millimeters) in 1,000 feet (305 meters). Unfortunately, Invar tapes are easily damaged for general use. Before the introduction of invar, iron bars immersed in melting ice were used for daytime measurements.

Sir Robert Watson – Watt, a Scottish physicist working in England, introduced an electronic pulse – type instrument in 1935 called hiran. It measures distances over water between land survey stations obscured from each other by the earth’s curvature. An airplane high enough to be visible from both stations crosses the line between them while sending out a series of pulses. These are automatically relayed back to the plane from each station. The minimum sum of distance represented by the timed returns is chosen, and the nearby sums are corrected to its average. The result is corrected for the altitude of the plane and the refraction of the atmosphere, and the final value is taken as a distance between the two stations. The electronic distance equipment is developed in phase – shift system.

The light beam requires a clear line of sight, while the radio can penetrate fog, haze, heavy rain, dust, sand storms, and some foliage. However, both types have a transmitter – receiver at one survey station. At the remote station, the light uses a set corner mirrors; but the high – frequency type utilizes a transmitter (requiring an operator) identical to a transmitter – receiver at the original station. A corner mirror has the shape of the inside as a cube. It returns light towards the source from whatever angle it is received, within reasonable limits. A retransmission must be aimed at the transmitter receiver. In both types of instrument, the distance is determined basically by the length of time it takes the radio or light beam to travel to the target and back.

Shift in phase of modulating signals:

The elapsed time is determined by the shift in phase of the modulating signal during its travels. Electronic circuitry detects this phase shift and converts it very accurately into the exact fraction of small unit distance. By using several frequencies for the modulator signal, the total distance can be computed.

Data collector Model – which is hand- held computer equipped to write these measurements to an external data collector.

Some total stations also have a GNSS interface (Global Navigation Satellite System Interface) which combines the advantages of these two technologies (GNSS line of sight not required between measured points, Total station – high precision especially in the vertical axis compared with GNSS) and reduce the consequences of each technology’s disadvantages (GNSS – Poor accuracy in the vertical axis and lower accuracy without long occupation period, Total station – requires line of sight observation and must be set up over a known point or with line of sight to two or more points with known location).

Measurement of distance is accomplished with a modulated microwave or infrared carrier signal generated by a small solid –state emitter within the instrument’s optical path, and reflected by a prism reflector or the object under survey. The modulation pattern in the returning signal is read and interpreted by the on board computer in the total station. The distance is determined by emitting and receiving multiple frequencies, and determining the integer number of wave lengths to the target for each frequency. Most total station use purpose built glass porro prism reflectors for the EDM signal, and can measure distances to a few kilometers. A typical total station can measure distances to about 3 milimeters or 1/1000th of a foot. However reflector in a total station can measure distances to any object that is reasonably light in colour, to a few hundred metres. But, robotic total stations allow the operator to control the instrument from a distance via remote control. This eliminates the need for as assistant staff member as the operator holds the reflector and controls the total station from the observed point.

A micrometer is an instrument for measuring the size and distance of distant objects.

Distant in this sense means a length that can not be readily measured by calibrated instrument. The optical version of this instrument used two mirrors on a common extant. By aligning the object on the mirrors using a precise vernier, the position of the mirrors could be used to compute the range of the object. The distance and the angular size of the object would then yield the actual size. The Micrometer Interferometer Surveyor is a Commercial GPS-based system for performing geodetic measurements.