The green algae (singular: green alga) are the large group of algae from which the embryophytes (higher plants) emerged.As such, they form a paraphyletic group, although the group including both green algae and embryophytes is monophyletic (and often just known as kingdom Plantae).

The green algae include unicellular and multicellular flagellates. There are about 6,000 species of green algae. Many species live most of their lives as single cells, while other species form colonies or long filaments 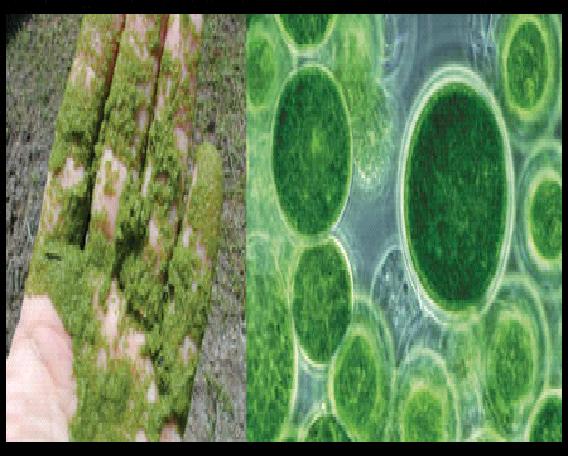 Algae are the green carpet that forms layer on the top of ponds or swimming pools. It may be long strands of seaweed, sometimes used for fertilizer or food. Algae may be easy to see, but appearances can be deceiving. There's an ongoing problem with algae that has enforced the scientists from the time when they started trying to organize and classify the natural world. Different types of algae may look similar, but they're actually very different organisms.

Algae may range in color from red to brown to yellow to green. Some types, like phytoplankton, are tiny and visible only under a microscope. Others types, like giant sea kelp, can grow to over 100 feet. Some types of algae are unicellular, which means the entire organism is made of one cell; others are multicellular.Strangest of all, there are some types of algae that sometimes behave like plants and sometimes behave like animals. Like a plant, these algae use photosynthesis to make food. (During photosynthesis, plants or algae use light from the sun to turn carbon dioxide and water into oxygen and food.) But when sunlight is not available, these organisms can still survive by eating other organisms including other algae.

As with all plants, algae photosynthesize, i.e. they convert carbon dioxide into organic compounds, especially sugars, using the energy from light.

The pH range for most cultured algal species is between 7 and 9, with the optimum range being 8.2-8.7.

The optimal temperature for algal growth is generally between 20 and 24°C. Temperatures lower than 16°C will slow down growth, whereas those higher than 35°are lethal for a number of species.

Marine algae are extremely tolerant to changes in salinity. Salinity of 20-24 g/l have been found to be optimal.

6. How to control Algae

Below are the most common treatments and methods for controlling algae. Each treatment method has its pros and cons. some methods may not work well with some special type of fish, plants, or other aquatic life.

Barley straw is an excellent way to stop the growth of algae. It is cost effective and .besides this it has no toxic effect on aquatic life.

Ultraviolet sterilizers are very important for controlling algae, it should be used according to need .excessive use is harmful for fish. UV sterilizers are sometimes referred to as clarifiers and are an important water treatment for killing free-floating bacteria, suspended algae, fungi, mold spores, viruses, and other parasites. The disadvantage of UV sterilizers is that the algae must pass through the light; any attached algae will not be killed.

If pond is not too large, a skimmer can be helpful trapping and filter debris from the water. Debris acts as nutrient for growth of algae. Skimmers aren't the best method for controlling algae, they can provide a tiny bit of assistance. Skimmers must also be cleaned out regularly so water can pass through. Biological filters are not so much effective in controlling algal growth.

It is recommended that you avoid chemical treatments such as algaecides. Because besides preventing algal growth, these treatments have many harmful effects on aquatic life. Many of them can be harmful to the environment as well.

Dyes are water treatments that shade the water. The shading stops vital sunlight, which the algae must have for photosynthesis.

Adding plants to water is a great natural way to help control algae. Aquatic plants can control algae utilizing their nutrients needed for their growth. They can also help shade the water therefore removing the required sunlight which the algae need for photosynthesis.

Algae eating fish help to clean the water simply by eating the algae growing on the bottom and sides of the pond. Tadpoles and snails are quite helpful.