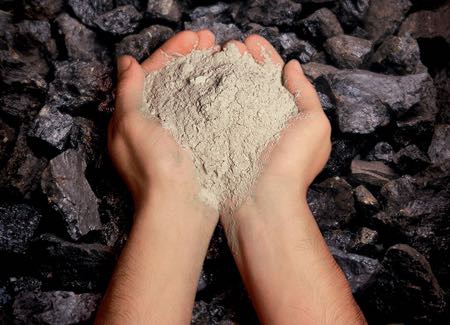 A simple everyday definition of 'pozzolan' could be 'a finely powdered material which can be added to lime mortar (or to Portland cement mortar) to increase durability. A more formal definition is given by ASTM C618-84 as 'a siliceous or siliceous and aluminous material which, in itself, possesses little or no cementitious value but which will, in finely divided form in the presence of moisture, react chemically with calcium hydroxide at ordinary temperature to form compounds possessing cementitious properties'

Sources and Types of Pozzolanic Material

Pozzolanic materials can be divided into the categories listed below, according to their origin and properties.

These materials are formed from a combination of minerals, (mainly consisting of silica and alumina with smaller and variable quantities of other minerals containing calcium, magnesium, iron, potassium, and sodium), ejected from volcanoes in the form of very finely divided vitreous material. Other vitreous volcanic material, such as basalt, may have mild pozzolanic properties if very finely ground.

These natural pozzolans were widely used in 19th century engineering works in conjunction with natural hydraulic limes. They were recognized as being particularly appropriate for marine engineering and other works in difficult wet conditions, and for civil engineering works generally. Well known sources include puozzolana from Puozzoli in Italy, volvic pozzolan from South-east France, trass from the Rhineland and tuff from the Aegean islands. Crushed pumice was also used.

Pozzolanic additives derived from lightly fired and finely crushed clay products, such as clay tile or brick, were used by the Romans and combinations of non-hydraulic lime and low temperature brick dusts have been used over a long period of time. Similar specifications are successfully employed in modern conservation practice where additional set and durability are required without seriously reducing the permeability and flexibility of the mortar.

Bodies such as English Heritage have promoted the use, particularly for conservation work, of low temperature clay pozzolans in non-hydraulic mortars. Current advice is that the material should be derived from clay fired at temperatures below 950 °C, and ground to a range of particle sizes between 38 and 600 microns.Modern sources of potentially suitable material include reject bricks and tiles from traditional producers, which can be crushed in a roller pan mill. Some manufacturers also produce low temperature purpose-made dusts for sale as pozzolans.

These are produced primarily for use with Portland cement and all currently available technical and performance data relates to their use in that context. These materials are highly reactive and combine readily with calcium hydroxide to form calcium silicate hydrates and calcium alumino-silicate hydrates. Their effect on the performance and characteristics of lime mortars is not currently known but, subject to adequate investigation and trials, it is possible that their use could be extended into this field.

Also falling into the category of fired clays is the material known as HTI (high temperature insulation) powder. This was widely specified in the 1980s but has now largely been superseded by lower temperature materials which are thought to be more consistent in their performance.

Furnace slag is a vitrified material, produced as a by-product of processes such as smelting, and requires grinding to convert it to a reactive material. It contains silica, alumina, lime and other minerals in various proportions and, in modern practice, is more commonly used as an additive in Portland cement concretes. Historically, forge scale and iron-rich slag, known as minion, were also used.

Coal cinders generally have an acceptable balance of silica and alumina, and have been used historically as a pozzolanic additive, but their physical structure tends to weaken the mortar and to absorb excessive water. Coal ash is widely used, in the form of PFA (pulverised fuel ash) as an additive to cementitious mortars and in lime-based grouts. The use of coal-based products carries a risk of sulphate contamination and the materials should always be selected from low sulphate coals. The residue of fuels from lime burning, whether from coal-, coke-, or wood-fired kilns, known as lime-ash, is well known historically as a pozzolan and is still available. Other vegetable ashes, such as rice husk ash, are used as pozzolans in other parts of the world. Bone ash is also known to have been used.

Certain types of sand, such as argillaceous (clayey) sands containing high proportions of schist, basalt, feldspar and mica, can have mildly pozzolanic properties. Whilst these sands are not generally specified for modern lime-based mortars it may be useful to recognize that, historically, in certain localities, their use could have influenced the nature of local lime mortars. Finely crushed rock products from sources containing an appropriate balance of minerals may also produce a mild pozzolanic effect. Traditionally, mortars were often produced using techniques which brought the sand into contact with hot slaking lime, and it is possible that this heat would have encouraged any potential for a mild pozzolanic reaction between sand and lime.

Methods of Natural Seasoning of Wood

What is Varnish and Types of Varnishes