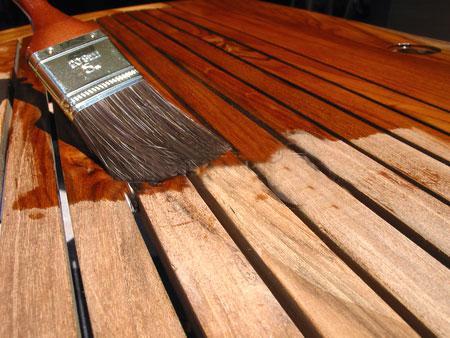 Varnishes are more or less transparent liquids which are used to provide a protective surface coating in much the same way as paints do” At the same time they allow the original surface to show but add a lustrous and glossy finish to it. All varnishes have basically the same components as paints.

What is Varnish? Varnish is a transparent, hard, protective finish or film primarily used in wood finishing but also for other materials. Varnish is traditionally a combination of a drying oil, a resin, and a thinner or solvent. Varnish finishes are usually glossy but may be designed to produce satin or semi-gloss sheens by the addition of "flatting" agents.

Made from natural resin ► altered by chemical action. Common resin is heat treated with glycerin to form a gum. This gum is treated as the body for the varnish. Less expensive varnish than the oleo resinous varnish

Short-oil contain 5 to 12 gal of oil per 100 lbs of resin. Dry rapidly ► form a hard, brittle film that withstand much rough usage. Polishing varnish belongs to this group

Overall, it can be stated that the improved element performed better than the traditional element in the series of earthquake simulations. This statement is based on an assessment of the risk of causing injury posed by each structure. The walls of the traditional corners were independent and unstable. Any additional force, such as another tremor or a strong wind or impact, could cause either wall to topple over, in an inward or outward direction. This represents an unacceptable level of risk. These buildings are one of the most deficient building systems from earthquake-resistance point of view. The main deficiencies include excessive wall thickness, absence of any connection between the two withes of the wall, and use of round stones (instead of shaped ones).

They are paints used for the treatment of masonry walls. Water instead of oil is used as a vehicle ► known as water-paint too. Powdered white chalk and glue boiled in water are mixed. Usually colored by mixing different pigments. All Distempers mixed with water only before being used. Distemper affected by weathering condition and takes off if washed ► to be used only in interior works. Cheap, durable and easy interior finish. Should be applied on clean and dry surface.

Advantages of Natural Seasoning of Wood

Applications of Bitumen in Civil Engineering

What is the Purpose of Applying Paints?

Sources and Types of Pozzolanic Material

Methods of Natural Seasoning of Wood
Characteristics of Good Paints