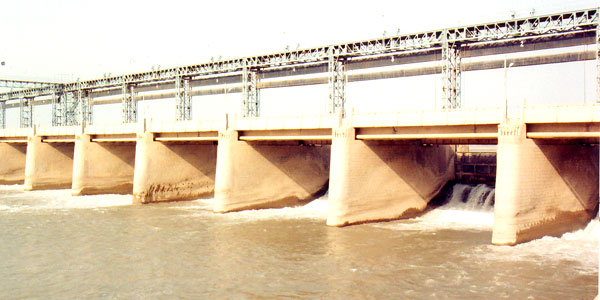 The following considerations should be kept in mind while selecting the site for a barrage.

River in alluvial plains while in flood spread over miles in width and in dry weather flow in channels.

For optimum width Lacey's Equation, related to wetted perimeter to discharge wetted perimeter in case of shallow channel is almost equal to the bed width of the channel. The barrage width must be sufficient to pass the design the flood safety. The present trend is to design barrage for a 100-150 years frequency flood. The minimum stable width of an alluvial channel is given by Regime Eq.

Due to high flow, the river bed is scoured both on the upstream and downstream sides of the weir, large scour holes develop progressively adjacent to the concrete aprons, the weir foundations may slip into these scour holes, thus undermining the weir structure. The regime scour depth Rs may be estimated by following formula.

If waterway provided is less than regime width and f = 1.75 under root d
d is mean diameter of bed material in mm.

Freeboard - Types, Determination & Uses of Freeboard in Dams
Spur Dikes Design and Requirements in Geometry
How to Design Barrage