By the time the tail water is dropped to 0.96D2 (depth after the jump), the jump will probably be completely out of the basin. Thus, to design a stilling basin in this range the tail water depth must be known with certainty or a factor of safety provided in the design. 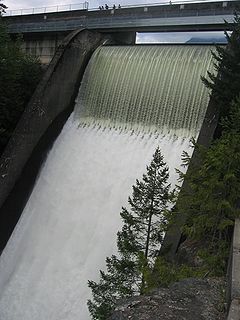 To guard against deficiency in tail water depth, the same procedure used for Basins Type I and Type II is suggested, the margin of safety can be observed for any value of the Froude number.

For values of the Froude number greater than 9, a 10-percent factor of safety may be advisable as this will not only stabilize the jump but will improve the performance of the basin. With the additional tail water depth, the horizontal apron will perform on a par with the sloping apron. Thus, the primary consideration in design need not be hydraulic but structural. The basin, with either horizontal or sloping apron, which can be constructed at the least cost is the most desirable.

Effect of slope on chute

A factor which occasionally affects stilling basin operation is the slope of the chute upstream from the basin. The foregoing experimentation was sufficiently extensive to shed some light on this factor. The tests showed that the slope of chute upstream from the stilling basin was unimportant, as far as jump performance was concerned, provided the velocity distribution in the jet entering the jump was reasonably uniform.

For steep chutes or short flat chutes, the velocity distribution can be considered normal. Difficulty is experienced, however, with long flat chutes where frictional resistance on the bottom and side walls is sufficient to produce a center velocity greatly exceeding that on the bottom or sides. When this occurs, greater activity results in the center of the stilling basin than at the sides, producing an asymmetrical jump with strong side eddies. This same effect is also witnessed when the angle of divergence of a chute is too great for the water to follow properly. In either case the surface of the jump is unusually rough and choppy and the position of the front of the jump is no always predictable.

When long chutes precede a stilling basin the practice has been to make the upstream portion, Unusually flat, then increase the slope to 2:1, or that corresponding to the natural trajectory of the jet, immediately preceding the stilling basin. Very long flat slopes have caused the velocity distribution to be completely out of balance. The most adverse condition has been observed, where long canal chutes terminate in stilling basins.

A definite improvement can be accomplished in future designs where long flat chutes are involved by utilizing the Type III basin described. The baffle piers on the floor tend to alter the asymmetrical jet, resulting in an overall improvement in operation.

The following rules have been devised for the design of the sloping aprons developed from the foregoing experiments: