Spur dikes (or groynes) are structures constructed projecting from a bank to protect the bank from erosion. These are widely used for the purpose of river training and serve one or more of the following functions: 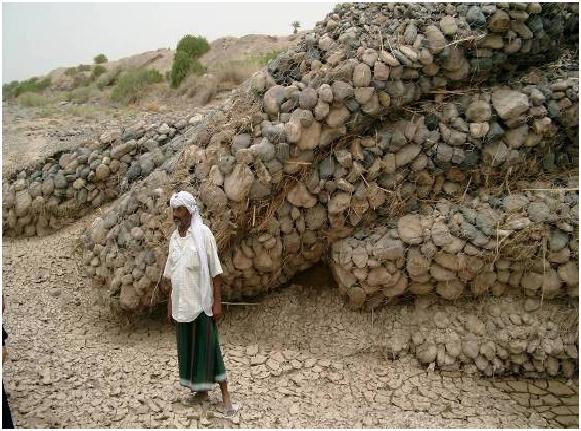 These structures may either be impermeable or permeable so as to allow some flow parallel to the bank, but at a low enough velocity to prevent erosion and / or encourage sediment deposition. Care needs to be exercised in the use of spurs to ensure that they do not simply transfer erosion from one location to another, or initiate unforeseen changes in the general channel morphology.

By acting on the flow around them, spurs dikes tend to increase local velocities and turbulence levels in their vicinity. The structure of the dike itself may be liable to erosion; flow moving parallel to the bank is intercepted and accelerates along the upstream face of the dike towards the nose. The high velocities and strong curvature of flow near the nose of a spur can cause significant scouring of the adjacent channel bed. Unless the foundations of the structure are deep enough or are well protected, the end section of dike may be undermined by local scour and could lead to a

The requirements of a spur are:

Depending upon the purpose, spurs can be used singly or in series. Spurs may be aligned either perpendicular to the bank line or at an angle pointing upstream or downstream. They can also be used in combination with other training measures. Their use in series is introduced if the river reach to be protected is long, or if a single spur is not efficient/strong enough to deflect the current and also not quite effective for sediment deposition upstream and downstream of itself. The structure located the farthest upstream in a series of spurs is much more susceptible to flow attack both on the river ward and landward ends. Thus it should be given special treatment to ensure its structural stability.

The position, length and shape of spurs depend on site conditions, and requires significant judgment on behalf of the designer. No single type of spur is suitable for all locations.

A spur angled upstream repels the river flow away from it and is called a repelling spur. These are preferred where major channel changes are required. A spur originally angled upstream may eventually end up nearly perpendicular to the streamlines after development of upstream side silt pocket and scour hole at the head. Repelling spurs need a strong head to resist the direct attack of swirling current. A silt pocket is formed on the upstream side of the spur, but only when the spurs are sufficiently long. Repelling spurs are usually constructed in a group to throw the current away from the bank. Single spurs are neither strong enough to deflect the current nor as effective in causing silt deposition upstream and downstream.

A spur angled downstream attracts the river flow towards it and is called an attracting spur. The angle of deflection downstream ranges between 30 to 60 degrees. The attracting spur bears the full fury of the frontal attack of the river on its upstream face, where it has to be armored adequately. Heavy protection is not necessary on the downstream slope. It merges into the general stream alignment more easily. The scour hole develops off the river-ward end of the structure.

When the upstream angled spur is of short length and changes only the direction of flow without repelling it, it is called a deflecting spur. It gives local protection only.

The angle which the spur makes with the current may affect the results. A spur built normal to the stream usually is the shortest possible and thus most economic. An upstream angle is better to protect the river ward end of the spur against scour. A downstream angle might be better for protecting a concave bank, especially if spacing and the lengths of the spurs are such to provide a continuous protection by deflecting the main currents away from the entire length of bank.

Types And Location of Canal Headworks
How to Design Barrage