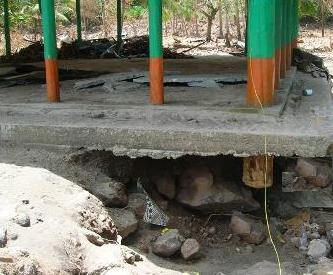 Local scour is the Erosion occurring over a region of limited extent due to local flow conditions, such as may be caused by the presence of hydraulic structures.

Scour is the result of the erosive action of flowing water excavating and carrying away material from the bed and banks of streams. Potential scour can be a significant factor in the analysis of a stream crossing system. The design of a crossing system involves an acceptable balance between a waterway opening that will not create undue damage by backwater or suffer undue damage from scour and a crossing profile sufficiently high to provide the required traffic service.

Clear water scour occurs when the bed material is not in motion. The sediment transported into the contracted section is essentially zero. Clear-water scour occurs when the shear stress induced by the water flow exceeds the critical shear stress of the bed material. Generally, with clear-water scour, no refilling occurs during the recession of the flood due to the lack of sediment supply.

The erosion, deposition, and transport of sediment by water arise in a variety of situations with engineering implications. Erosion must be considered in the design of stable channels or the design for local scour around bridge piers. Resuspension of possibly contaminated bottom sediments have consequences for water quality. Deposition is often undesirable since it may hinder the operation, or shorten the working life, of hydraulic structures or navigational channels. Sediment traps are specifically designed to promote the deposition of suspended material to minimize their downstream impact, e.g., on cooling water inlet works, or in water treatment plants.

Hydraulic structures, such as bridge piers or abutments, that obstruct or otherwise change the flow pattern in the vicinity of the structure, may cause localized erosion or scour. Changes in flow characteristics lead to changes in sediment transport capacity, and hence to a local disequilibrium between actual sediment load and the capacity of the flow to transport sediment. A new equilibrium may eventually be restored as hydraulic conditions are adjusted through scour.

Clear-water scour occurs when there is effectively zero sediment transport upstream of the obstruction, i.e., Frg < (Frg)c upstream, while live-bedscour occurs when there would be general sediment transport even in the absence of the local obstruction, i.e., Frg > (Frg)c , upstream. Additional difficulties in treating local scour stem from flow non-uniformity and unsteadiness. The many different types and geometries of hydraulic structures lead to a wide variety of scour problems, which precludes any detailed unified treatment. Design for local scour requires many considerations and the results given below should be considered only as a part of the design process.

Empirical formulae have been developed for special scour problems; only two are presented here, both relevant to problems associated with bridge crossings over waterways, one for contraction scour, and one for scour around a bridge pier. Consider a channel contraction sufficiently long that uniform flow is established in the contracted section, which is uniformly scoured. The entire discharge is assumed to flow through the approach and the contracted channels.

Application of conservation of water and sediment (assuming a simple transport formula of power-law form, gT ~ Vm) results in where the subscripts, 1 and 2, indicate the contracted (2) or the approach (1) channels, H the flow depth, and B the channel width.

The exponent, a, varies from 0.64 to 0.86, increasing with tc/t1, where tc is the critical shear stress for the bed material, and t1 is total bed shear stress in the main channel. A value of a = 0.64, corresponding to tc/t1 _ 1, i.e., significant transport in the main channel, is often used. Scour around bridge piers has been much studied in the laboratory but field studies have been hampered by inadequate instrumentation and measurement procedures. For design purposes, interest is focused on the maximum scour depth at piers. A wide variety of formulae have been proposed; only one will be presented here, namely that developed at Colorado State University, and recommended by the U. S. Federal Highway.