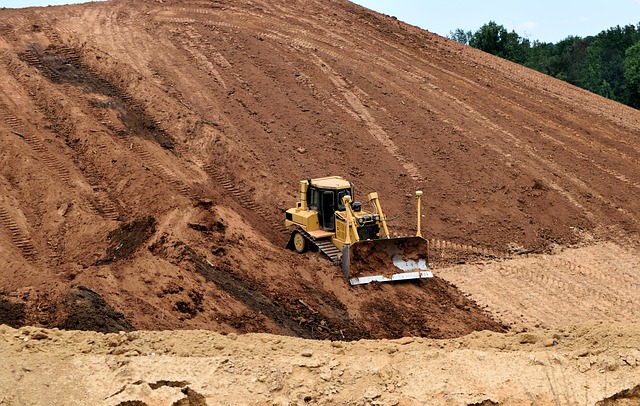 After studying a lot of dam failure constructed based on Bligh’s theory, Khosla came out with his own findings. Following are some of the main points from Khosla's Theory

From observation of Siphons designed on Bligh's theory, by actual measurement of pressure, with the help of pipes inserted in the floor of two of the siphons does not show any relationship with pressure calculated on Bligh's theory. This led to the following provisional conclusions:

For case of two dimensional flows under a straight floor where:

Thus for the first flow line AB which touches the outline of the floor, the pressure can be obtained by putting different values of x in equation. Fig shows the pressure distribution diameter both by equation 4 as well as Bligh's Theory. From the fig the following conclusions can be drawn:

For the determination of seepage below the foundation of hydraulic structure developed the method of independent variable.
In this method, the actual profile of a weir which is complex, is divided into a number simple profiles, each of which cab be solved mathematically without much difficulty. The most useful profile considered are:

ii) A straight horizontal floor depressed below the bed, but without any vertical cut-off.

The mathematical solution of the flow-nets of the above profiles have been given in the form of curves. From the curves, percentage pressures at various key points E, C, E1, C1 etc) be determined. The important points to note are:

The percentage pressures at the key points of a simple forms will become valid for any complex profile, provided the following corrections are effected:

Correction for Mutual Interference of Piles

D = the depth of the pile line (2), the influence of which on the neighboring pile (1) of depth d must be determined

b = total length of the impervious floor

c = correction due to interference.

The correction is applied as a percentage of the head

Standard profiles assuming the floors as having negligible thickness. Hence the values of the percentage pressures computed from the curves corresponds to the top levels (E1*, C1*) of the floor. However, the junction points of the floor and pile are at the bottom of the floor (E1, C1) 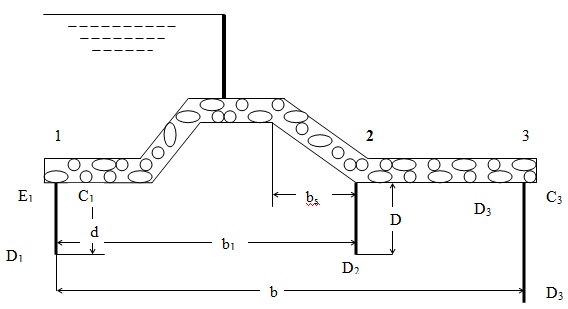 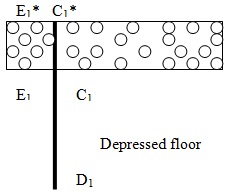 The corrected pressures at E1 should be less than the computed pressure t E1*. Therefore the correction for the pressure at E1 will be negative. And so also is for pressure at C1.

Correction for Slope of Floor

The correction factor must be multiplied by the horizontal length of the slope and divided by the distance between the two poles between which the sloping floor exists. In the diagram above, correction for slope can be applied only to point E2. As the point E2 is terminating at the descending slope in the direction of flow, the correction will be positive. The value of correction will be:
C.F. x bs/b1

b1 = horizontal distance between the pile lines

Hence for stability of the soil and for the prevention of erosion and piping, the seeping water when it emerges at the downstream side, at the exit position, the force f1 should be less than the submerged weight W. In other words the exit gradient at the downstream end must be safe.

Values of safe exit gradient may be taken as:

For the standard form consisting of a floor of a length b, and a vertical cut-off of depth d, the exit gradient at its downstream end is given by: