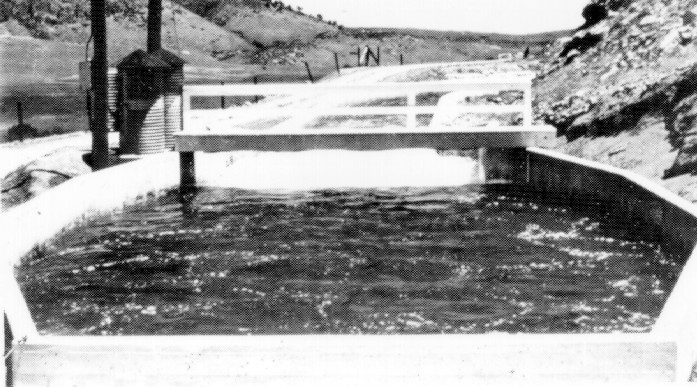 By far the most effective wave dissipater is the short-tube type of underpass suppressor. The name "short-tube" is used because the structure has many of the characteristics of the short-tube discussed in hydraulic textbooks. This wave suppressor may be added to an existing structure or included in the original construction. In either case it provides a slightly structure, which is economical to construct and effective in operation,

Essentially, the structure consists of a horizontal roof placed in the flow channel with a headwall sufficiently high to cause all flow to pass beneath the roof. The height of the roof above the channel floor may be set to reduce wave heights effectively for a considerable range of flows or channel stages. The length of the roof, however, determines the amount of wave suppression obtained for any particular roof setting.

The recommendations for this structure are based on three separate model investigations, each having different flow conditions and wave reduction requirements. The design is then generalized based on physical modeling.

The effectiveness of underpass wave suppressor is illustrated in below Figures., which shows one of the hydraulic models used to develop the wave suppressor and the effect of the suppressor on the waves in the canal, Figure shows before and after photographs of the prototype installation, indicating that the prototype performance was as good as predicted by the model. In this instance it was desired to reduce wave heights entering a lined canal to prevent overtopping of the canal lining at near maximum discharges. Below 3,000 cubic feet per second, waves were in evidence but did not overtop the lining. 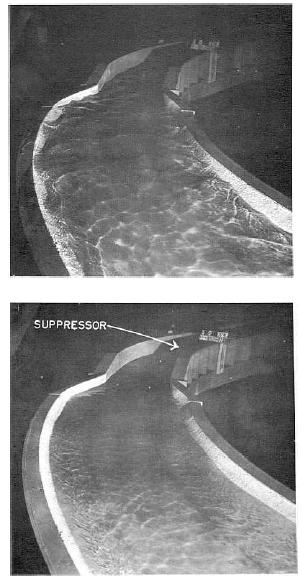 Tests were made with a suppressor 21 feet long using discharges from 2,000 to 5,000 c.f.s. The suppressor was located downstream from the stilling basin. The results of tests to determine the optimum opening between the roof and the channel floor using the maximum discharge, 5,000 c.f.s. With a 14-foot opening, waves were reduced from about 8 feet to about 3feet. Waves were reduced to less than 2 feet with an opening of 11 feet. Smaller openings produced less wave height reduction because of the turbulence created at the underpass exit. Thus, it may be seen that an opening of from 10 to 12 feet produced optimum results. With the opening set at 11 feet, the suppressor effect was then determined for other discharges.

The same type of wave suppressor was successfully used in an installation where it was necessary to obtain optimum wave height reductions, since flow from the underpass discharged directly into a measuring flume in which it was desired to obtain accurate discharge measurements. The capacity of the structure was 625 cubic feet per second, but it was necessary for the underpass to function for low flows as well as for the maximum. Here it may be seen that the maximum wave height, measured from minimum trough to maximum crest, did not occur on successive waves. Thus, the water surface will appear smoother to the eye than is indicated by the maximum wave heights.