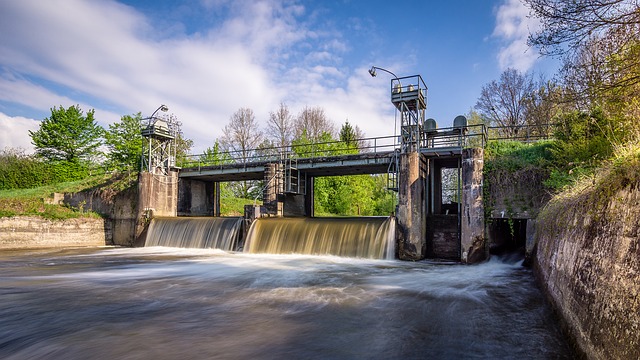 Flood plain of river. Khadir axis is a line passing through the center of the river course between the two high banks up to back water effect.

Line along which the crest of the weir is laid.

Line parallel to Khadir axis at the center of weir or barrage axis between the abutments.

Line perpendicular to weir axis at the center of weir abutments.

When the angle between the headwork axis and the river axis exceeds 10°, the problem arises of concentration of flow on one side and island formation due to heavy silting within the guide bank on the other side. If the river axis is to the right of headwork axis, the concentration of flow is generally generally on the left side with consequent tendency to form an island on the right side and vice versa.

It is a temporary phenomenon which occurs after the construction of barrage in the river flowing through alluvial soil. As a result of back water effect and increase in the depth, the velocity of water decreases resulting in deposition of sedimentation load. The water flowing through the barrage have less silt, so water picks up silt from downstream bed. This results in lowering d/s river bed to a few miles. This is known as retrogression. It may occur for the first few years and bed levels often recover their previous level. Within a few years, water flowing over the weir has a normal silt load and this cycle reverses. Then due to greater depth, silt is deposited and d/s bed recovers to equilibrium. Retrogression value is minimum for flood discharge and maximum for low discharge. The values vary (2-8.5) ft.