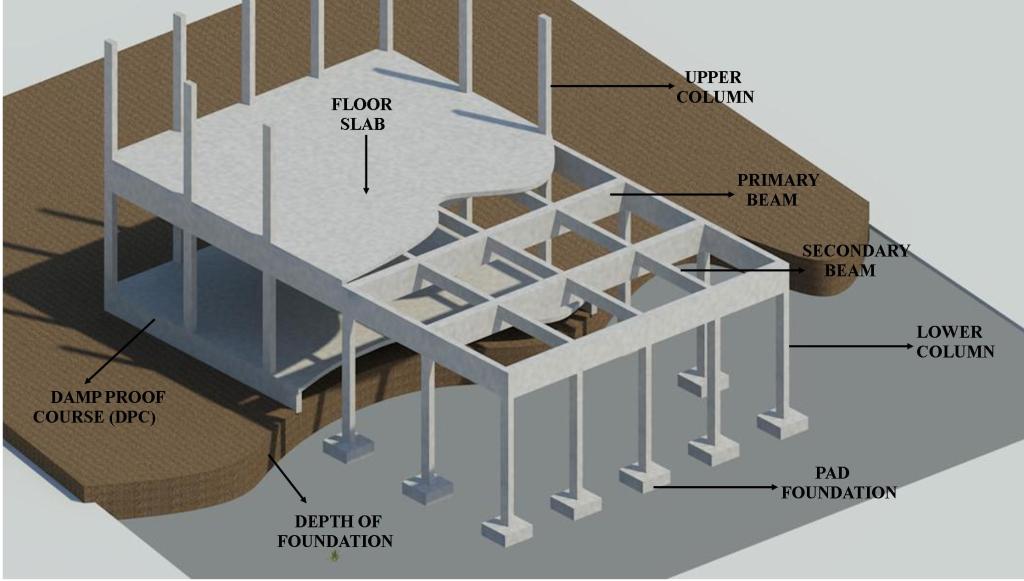 See Image of the Building Elements at the Bottom

It is the floor that has 1 storey height above ground.

The floor of the basement of the building. It is also called cellar. The basement floor is either completely or partially below the ground floor. A basement can be used in almost exactly the same manner as an additional above-ground floor of a house or other building. However, the use of basements depends largely on factors specific to a particular geographical area such as climate, soil, seismic activity, building technology, and real estate economics.

The concrete floor in most basements is structurally not part of the foundation; only the basement walls are. Since warm air rises, basements are typically cooler than the rest of the house. In summer, this makes basements damp, due to the higher relative humidity.

Column Bracket is protrusion from the column also used for hanging or attaching lamps, bulbs or other accessories to it like road signs.

Column capital is an architectural element used for aesthetic purposes which forms the topmost member of a column.

Drop panels are used to thicken the slab around the column in flat slabs to avoid punching shear. Since flat slabs have no stirrups shear is resisted by thickening the slab around the column to increase the concrete in shear. Beams can also be used, but generally drop panels are preferred to avoid conflicts with the electro-mechanical works of the structure.

The columns supporting the main structure of the building. Usually in frame structures the exterior columns are of extreme importance and bear the load of the building as well as resist environmental factors like wind, rain, and other physical factors.

Slabs connecting to columns directly. Flat plate system is widely adopted by engineers as it provides many advantages . The system can reduce the height of the building, provide more flexible spatial planning due to no beams present, and further reduce the material cost. However, the main problem in practice is the brittle failure of flat plate under punching shear. Due to the relatively small floor loading and the close column spacing, flat plate construction is preferred. For heavier loading and larger column spacing, column capitals are required, and for even larger spans to reduce the self-weight, waffle slabs are used.

The flat plate is a two-way reinforced concrete framing system utilizing a slab of uniform thickness, the simplest of structural shapes. The flat slab is a two-way reinforced structural system that includes either drop panels or column capitals at columns to resist heavier loads and thus permit longer spans. Construction of flat slabs is one of the quickest methods available. Lead times are very short as this is one of the most common forms of construction.

Interior columns in a frame structure support the slab and beams internally. They are not as susceptible to buckling and environmental effects as the external ones but still are extremely important considering the safety and stability of the building. Interior columns can also serve aesthetic and architectural purposes.

An architectural support or base, as for a column or statue.

A roof is the covering on the uppermost part of a building. A roof protects the building and its contents from the effects of weather and the invasion of animals. Structures that require roofs range from a letter box to a cathedral or stadium, house buildings being the most numerous.

The elements in the design of a roof are: 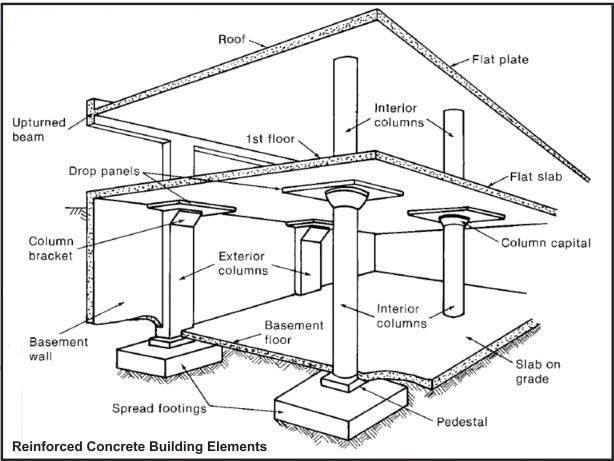 To distribute the load of the foundation on the soil, spread footings are installed below the building's foundation. This type of footing is continuous below the perimeter of the house walls and may be thickened or widened at the points where concentrated loads are applied e.g. columns. These components are constructed from concrete and are often reinforced with rebar or steel to add additional support. Depending on the size and configuration of the building, the footers can be buried just below ground level or several feet below the surface. In cold climates, they are always placed below the frost line to minimize problems with concrete heaving that occurs during freeze/thaw cycles. This type of footer design is highly beneficial to builders and homeowners. Since they transfer the weight of the building over a large area, they have little risk of failure

Through the use of upturned concrete T-beams, designers created a naturally ventilated work space that employs the thermal mass of an exposed concrete ceiling. This concrete absorbs heat during the day and is purged at night by cool breezes. The term is usually used in concrete construction, in parking structures, but here is how it works:

The beam is above the floor it supports, or a combination. Take a parking structure, there is the required barrier wall, so if you turn the beam up it acts as support and the barrier. Think of your simple beam diagram with a uniform load on it. The beam supports this load, so it doesn't matter if the load is applied at the bottom (simply, other than there are the compression/tension face)

This also works well in buildings, rather than have a large beam under the floor, the beam is cast above and below the floors, acts as bearing and shear tension and compression face reinforcement will be some what different, but beam cross section area will stay the same.

Steps for How to Construct a Stone Wall

How to Build a Stone Wall?