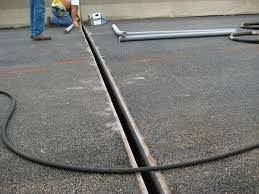 These are structural separation between building elements that allow independent movement without damage to the assembly. An expansion joint is used in concrete and steel. An expansion joint allows the concrete or steel to expand or contract with daily temperature variations. If you don’t allow this, you may get buckling, or spalling, or total failures. They are commonly provided in bridges, railway tracks, piping systems, and other structures.

A control joint or contraction joint is a joint that is put in the concrete to control cracking. Control Joints (often confused with expansion joints) are cuts or grooves made in concrete or asphalt at regular intervals. These joints are made at locations where there are chances of cracks or where the concentration of stresses are expected, so that when a concrete does crack, the location will be known to you. In such a way concrete will not crack randomly but in a straight line (i.e. control joint). In other words Contraction or Control Joints are Pre-Planned Cracks. The cracks may be due to temperature variations or drying shrinkage or other reasons.

Joints depth should be 25% of the depth of the slab. For instance a 4" thick slab should have 1" deep cut. Joints Interval (taken in feet) should not be more than 2 - 3 times the slab thickness (in inches). Let say a 6" slab should have joints 2 x 6=12 to 3 x 6 = 18 feet apart. For fresh concrete grooving tools are used while saw is used for hardened concrete.

Unintentional provision may occur due to