Pile Foundations are installed by a special pile driving device known as a pile hammer. The hammer may be suspended from the boom of a crawler crane, supported on a large frame called a pile driver or carried on a barge for construction in water. In all cases, the hammer is guided between two parallel steel members called leads. The leads may be adjusted at various angles for driving vertical and batter piles.

Several types of hammers are in use and each of which are different sizes. The hammer types are:

The drop hammer in the 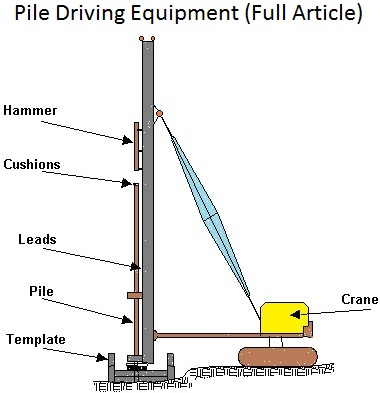 pile driving equipment consists of a heavy ram in between the leads. The ram is lifted up to a certain height and released to drop on the pile. This type is slow and therefore not in common use. It is used in the cases where only a small number of piles are driven. 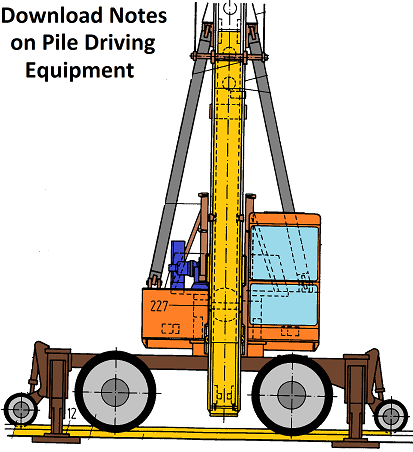 The diesel hammer is a small, light weight and highly mobile. They use gasoline for fuel. To start the operation, the ram is raised, and the fuel is injected. As the ram is released, the ram falls and compresses air and fuel. The air and fuel becomes hot because of the compression and the air-fuel mixture is ignited. The resulting explosion

The principle of the vibratory driver is two counter-rotating eccentric weights. The driving unit vibrates at high frequency and provides two vertical impulses, one up and one down. The downward pulse acts with the pile weight to increase the apparent gravity force. These hummers have reduced driving vibrations, reduced noise, and great speed of penetration.

Generally the size of hammer is more important factor than type of hammer. A heavy pile should be driven by a heavy hammer delivering large energy. Preferably the weight of HKjmcr should beat ^H HB1 the total weight of the pile and the deriving energy should be at Hpiie foot-pound for each pound of pile weight. Each type of hammer has its use under suitable conditions, The advantages and disadvantages of cach type are summarized below:

They are generally used to drive piles of light or moderate weight in soils of average resistance against driving. This type of hammer can drive piles at fast speed, requires less headroom and can be used to extract piles by turning them [i.e. the double-acting hammer] upside down.

They are similar in application as double-acting hammers, but driving may become difficult in extremely soft ground.

They have fairly good results in silty and clayey deposits. They are used in heavy clays or soils with appreciable numbers of boulders. See above for other advantages.

Purposes and Functions of Foundations