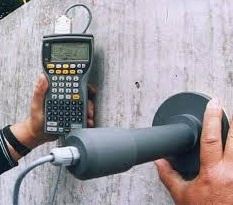 These tests can be categorized in two parts:

Non destructive tests are the representation of relation between the property of structure which is being tested and the strength of test specimen. These tests are usually done in case of disputes between the parties which are involved in construction of any type of structure. Clients usually ask to conduct the test of strength of concrete which is being used in the structure.

The most common tests which are usually conducted are:

It is one of the oldest non destructive test. This test is widely used because of its economical procedure. It is used to evaluate the surface hardness of concrete.

The rebound hammer is a surface hardness tester for which an empirical correlation has been established between strength and rebound number. Schmidt hammer, which weighs about 4 lb (1.8 kg) is used for this testing purpose as it incorporates the rebound principle for testing of concrete.  The hammer is forced against the surface of the concrete by the spring and the distance of rebound is measured on a scale. The test surface can be horizontal, vertical or at any angle but the instrument must be calibrated in this position.

Calibration can be done with cylinders (6 by 12 in., 15 by 30 cm) of the same cement and aggregate as will be used on the job. The cylinders are capped and firmly held in a compression machine. Several readings are taken, well distributed and reproducible, the average representing the rebound number for the cylinder. This procedure is repeated with several cylinders, after which compressive strengths are obtained.

This test has automatic program apparatus. Apparatus is just placed on specimen. The waves pass through the specimen. Time taken by waves to reach from one end of specimen to other is considered to be the strength of specimen. Less the time taken, weaker will be the specimen and vice versa).

It measures the time of travel of an ultrasonic pulse passing through the concrete. The fundamental design features of all commercially available units are very similar, consisting of a pulse generator and a pulse receiver. Pulses are generated by shock-exciting piezo-electric crystals, with similar crystals used in the receiver. The time taken for the pulse to pass through the concrete is measured by electronic measuring circuits.

Ultrasonic pulse velocity tests have a great potential for concrete control, particularly for establishing uniformity and detecting cracks or defects. Its use for predicting strength is much more limited, owing to the large number at variables affecting the relation between strength and pulse velocity.

This test measure the strength of specimen by means of special tension jacks that are usually used to be inserted in test specimen.