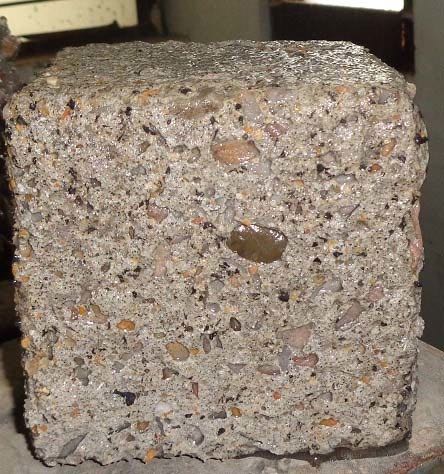 Ordinary Portland Cement (OPC) is highly alkaline in nature with pH values above 12. When the cement paste comes into contact with the acids its components break down, this phenomenon is known as acid attack.

If pH decreases to values lower than stability limits of cement hydrates, then the corresponding hydrate loses calcium and decomposes to amorphous hydrogel. The final reaction products of acid attack are the corresponding calcium salts of the acid as well as hydrogels of silicium, aluminum, and ferric oxides.

When acid attack concrete it dissolves both hydrated and un-hydrated cement compounds as well as calcareous aggregates. In many of the cases the chemical reaction results in water soluble calcium compounds which are leached away. Concrete vulnerability to acid attack increases as the pH of the acid in contact decreases from 6.5. Degree of aggression is Slight for pH: 6.5 to 5.5, Severe for pH: 5.5 to 4.5 and Very Severe for pH less than 4.5.

Note that the aggression of the acid attack is not only because of its pH value but also due to the presence of CO2 in relation with the hardness of water.

Effect of Sulphuric Acid on Concrete:

Sulphuric acid attack causes extensive formation of gypsum in the regions close to the surfaces, and tends to cause disintegration and mechanical stresses which ultimately lead to spalling and exposure of the fresh interior surface. Normally, the chemical changes of the cement matrix are restricted to the regions close to the surfaces because of less penetration of the Sulfuric acid in concrete.

However, in some cases it is observed that scaling and softening of the concrete occurs due to the early decomposition of calcium hydroxide and the subsequent formation of large amount of gypsum. The chemical reactions involved in sulphuric acid attack on cement based materials can be given as follows:

Effect of Nitric Acid on Concrete

Nitric acid usually occurs in chemical plants producing explosives, artificial manure and other similar products. Nitric acid can be formed from the compounds and radicals of nitrates in the presence of water

Nitric acid attack is a typical acidic corrosion for shrinkage of the corroded layer due to leaching of highly soluble calcium nitrate.
Such volume contractions of the corroded layer, especially for the case of nitric acid, can result in the formation of visually observable cracks across the corroded layer. In the presence of these cracks the transport rate of acid and corrosion products to and from the corrosion front increases and this accelerates the process of deterioration.

Effect of Acetic Acid on Concrete

Concrete in use in agricultural applications may be attacked by the silage effluents containing mainly acetic and lactic acid.
Acetic acid reacts with cement hydration products to form calcium acetate

In lower concentrations of both acetic and nitric acid solutions, e.g. 0.025 mol l-1, results in the formation of an additional zone, called as core-layer, which is relatively hard and located behind the corroded layer.

The reaction essentially causes leaching of Ca(OH)2 from the set cement.

Hydrochloric acid attack is a typical acidic corrosion which can be characterized by the formation of layer structure. Chandra divided the cross section of damaged prisms into three main zones; undamaged zone, hydroxide mixture zone or brown ring, and attacked zone. By hydroxide mixture zone, he referred to a layer formed by undissolved salts seen as a dark brown ring.

When concrete is exposed to carbonic acid, a reaction producing carbonates take place which is accompanied by shrinkage. Limited carbonation of surface layer of concrete is known to seal the pores by forming calcium carbonate, which reduces the permeability and increases the strength of the carbonated layer. However, continued carbonation may cause a reduction in alkalinity of the cement paste which can be a serious problem not only in de-passivation and corrosion of steel bars but also in dissolution of cement hydrates.

Grube and Rechenberg described that continued carbonation due to carbonic acid attack causes:

The transformation of calcium carbonate into soluble bicarbonate which is removed by leaching into the acidic solution and thus increasing the porosity.

Decomposition of cement hydration products, leading to formation of gel-like layer consisting of hydrogels of silica, alumina and ferric oxide.