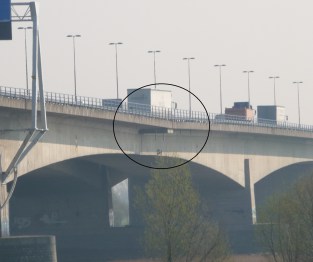 Concrete creep is defined as: deformation of structure under sustained load. Basically, long term pressure or stress on concrete can make it change shape. This deformation usually occurs in the direction the force is being applied. Like a concrete column getting more compressed, or a beam bending. Creep does not necessarily cause concrete to fail or break apart. When a load is applied to concrete, it experiences an instantaneous elastic strain which develops into creep strain if the load is sustained.

Creep is factored in when concrete structures are designed.

The magnitude of creep strain is one to three times the value of the instantaneous elastic strain, it is proportional to cement-paste content and, thus, inversely proportional to aggregate volumetric content. The magnitude of creep is dependent upon the magnitude of the applied stress, the age and strength of the concrete, properties of aggregates and cementitious materials, amount of cement paste, size and shape of concrete specimen, volume to surface ratio, amount of steel reinforcement, curing conditions, and environmental conditions.

Aggregate undergoes very little creep. It is really the paste which is responsible for the creep. However, the aggregate influences the creep of concrete through a restraining effect on the magnitude of creep. The paste which is creeping under load is restrained by aggregate which do not creep. The stronger the aggregate the more is the restraining effect and hence the less is the magnitude of creep. An increase from 65 to 75 % of volumetric content of the aggregate will decrease the creep by 10 %.

The amount of paste content and its quality is one of the most important factors influencing creep. A poorer paste structure undergoes higher creep. Therefore, it can be said that creep increases with increase in water/cement ratio. In other words, it can also be said that creep is inversely proportional to the strength of concrete. Broadly speaking, all other factors which are affecting the water/cement ratio are also affecting the creep.

Age at which a concrete member is loaded will have a predominant effect on the magnitude of creep. This can be easily understood from the fact that the quality of gel improves with time. Such gel creeps less, whereas a young gel under load being not so stronger creeps more. What is said above is not a very accurate statement because of the fact that the moisture content of the concrete being different at different age also influences the magnitude of creep.

Effects of Creep on Concrete and Reinforced Concrete