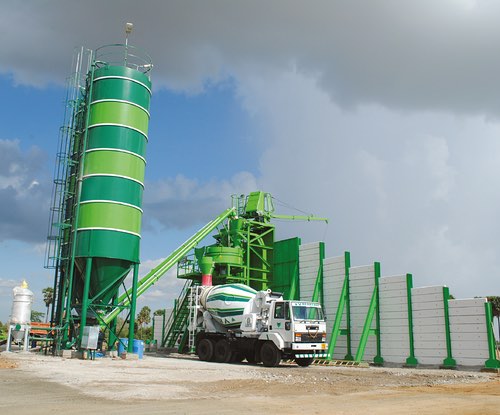 Batching is the process of measuring concrete mix ingredients either by volume or by mass and introducing them into the mixture. Traditionally batching is done by volume but most specifications require that batching be done by mass rather than volume. Percentage of accuracy for measurement of concrete materials as follows.

Water is measured in volumetric quantity as 1 litre = 1kg. In case of water, the measuring accuracy should be within 1%.

The mixing operation consists of rotation or stirring, the objective being to coat the surface the all aggregate particles with cement paste, and to blind all the ingredients of the concrete into a uniform mass; this uniformity must not be disturbed by the process of discharging from the mixer.

The usual type of mixer is a batch mixer, which means that one batch of concrete is mixed and discharged before any more materials are put into the mixer. There are four types of batch mixer.

A tilting drum mixer is one whose drum in which mixing take place is tilted for discharging. The drum is conical or bowl shaped with internal vanes, and the discharge is rapid and unsegregated so that these mixers are suitable for mixes of low workability and for those containing large size aggregate.

A non tilting drum is one in which the axis of the mixer is always horizontal, and discharge take place by inserting a chute into the drum or by reversing the direction or rotation of drum. Because of slow rate of discharge, some segregation may occur.

A pan type mixer is a forced–action mixer, as distinct from drum mixer which relies on the free fall of the concrete inside the drum. The pan mixer consist of a circular pan rotating about its axis with one or two stars paddles rotating about vertical axis of pan.

A dual drum is sometimes used in highway construction. Here there are two drums in series, concrete being mixed part of the time in one and then transferred to the other for the remainder of the mixing time before discharging.

These are fed automatically by a continuous weigh-batching system.

There are no general rules on the order of feeding the ingredients into the mixer as this depend on the properties of the mixer and mix. Usually a small quantity of water is fed first, followed by all the solids materials. If possible greater part of the water should also be fed during the same time, the remainder being added after the solids. However, when using very dry mixes in drum mixers it is necessary to feed the coarse aggregate just after the small initial water feed in order to ensure that the aggregate surface is sufficiently wetted.

In any mixer, it is essential that a sufficient interchange of materials occurs between parts of the chamber, so that a uniform concrete is produced. The efficiency of the mixer can be measured by the variability of the samples from the mix. ASTM prescribes samples to be taken from about points 1/6 and 5/6 of the discharge of the batch and the difference in the properties of the two samples should not exceed any of the following:

It is important to know the minimum mixing time necessary to produce a concrete of uniform composition, and of reliable strength.

The mixing time or period should be measured from time all the cementing materials and aggregates are in mixer drum till taking out the concrete.

Mixing time depends on the type and size of mixer, on the speed of rotation, and on the quality of blending of ingredients during charging of the mixer. Generally, a mixing time of less than 1 to 1.25 minutes produces appreciable non-uniformity in composition and a significant lower strength; mixing beyond 2 minutes causes no significant improvement in these properties.

If mixing take place over a long period, evaporation of water from the mix can occur, with a consequent decrease in workability and an increase in strength. A secondary effect is that of grinding of the aggregate, particularly if soft; the grading thus becomes finer and the workability lower. In case of air entrained concrete, prolong mixing reduces the air content.

If instead of being batched and mixed on site, concrete is delivered for placing from a central plant. It is referred to as ready-mixed or pre-mixed concrete. This type of concrete is used extensively abroad as it offers numerous advantages in comparison with other methods of manufacture:

There are two categories of ready-mixed concrete: central-mixed and transit mixed or truck mixed. In the first category, mixing is done in a central plant and then concrete is transported in an agitator truck. In the second category, the materials are batched at a central plant but are mixed in a truck.

Concrete Placing and Compaction of Concrete

The operation of placing and compaction are interdependent and are carried out simultaneously. They are most important for the purpose of ensuring the requirements of strength, impermeability and durability of hardened concrete in the actual structure. As for as placing is concerned, the main objective is to deposit the concrete as close as possible to its final position so that segregation is avoided and the concrete can be fully compacted. The aim of good concrete placing can be stated quite simply.

It is to get the concrete into position at a speed, and in a condition, that allow it to be compacted properly.

To achieve proper placing following rules should be kept in mind:

Once the concrete has been placed, it is ready to be compacted. The purpose of compaction is to get rid of the air voids that are trapped in loose concrete.

Why is compaction of concrete necessary?

It is important to compact the concrete fully because: 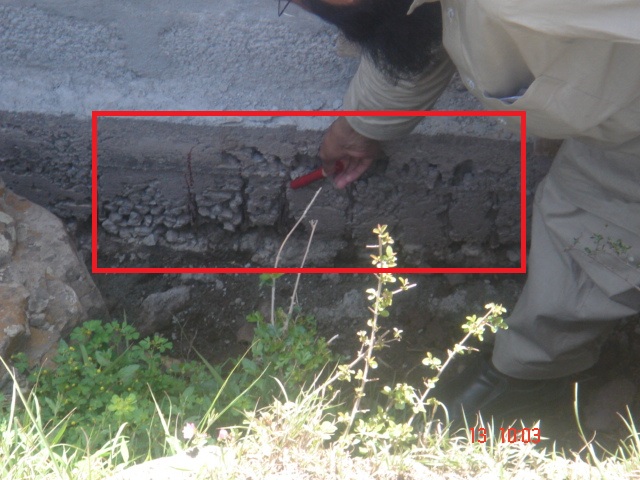 Stiff mixes contain far more air than workable ones. That is one of the reasons why a low-slump concrete requires more compactive effort than one with a higher slump - the compaction needs to continue for a longer time, or more equipment has to be used.

Even air-entrained concrete needs to be compacted to get rid of entrapped air voids. The difference between air voids and entrained air bubbles should be noted at this stage. The air bubbles that are entrained are relatively small and spherical in shape, increase the workability of the mix, reduce bleeding, and increase frost resistance. Entrapped air on the other hand tends to be irregular in shape and is detrimental to the strength of the mix. It is to remove this air that the concrete must be properly compacted. There is little danger that compaction will remove the minute air bubbles that have been deliberately entrained, since they are so stable.

Methods of Compaction of concrete

To compact concrete you apply energy to it so that the mix becomes more fluid. Air trapped in it can then rise to the top and escape. As a result, the concrete becomes consolidated, and you are left with a good dense material that will, after proper curing, develop its full strength and durability.

Pokers with diameters ranging from 25 to 75mm are readily available, and these are suitable for most reinforced concrete work. Larger pokers are available - with diameters up to 150mm - but these are for mass concrete in heavy civil engineering.