In order to describe the super critical flow and sub critical flow, there is need to define the Froude number. Froude number can be defined as the velocity divided by the square root of gravitational constant multiplied by the depth. It is dimensionless quantity.

Now move toward the hydraulic jump, it can be defined as rise in the level of water when the water transforms its super critical form into the sub critical one i.e. from unstable state to the stable one. This phenomenon can be observed on spillways of the dam. As it's the nature of water to gain its stability after it is being unstable. The place where hydraulic jump occurs, a lot of energy is dissipated in the form of heat energy. We can say that hydraulic jump is dissipator of extra energy of water. This phenomenon is usually used in spillways of the dam to reduce the erosive power of super critical flow. Otherwise it will affect the dam structure.

Height of hydraulic jump can be calculated by the formula: 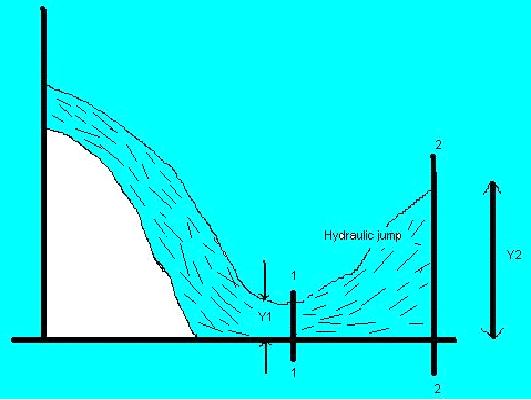 We can say that Y1 is depth at the state of stable sub critical while on the other hand Y2 is the height of the flow after the hydraulic jump.Y1 can be calculated easily. While Y2 can be calculated by the formula:

It is very common in the field of hydraulics to use hydraulic jump. It is used to perform different functions. Some of the effects of the hydraulic jump are as under:

Turbine - Definition and Types of Turbines