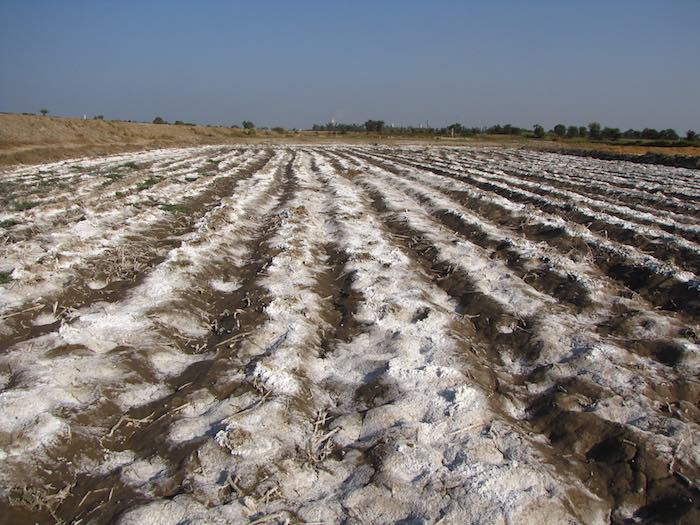 The irrigation system in Pakistan has brought great benefits to many people. Dependence on the natural hydrological system has been minimized and new settlements in canal irrigated areas have been established. However, the canal system has been accompanied by problems, which are increasingly difficult to overcome.

Water logging and salinity are two of the outcomes of canal irrigation in Pakistan. When only inundation canals were used, water for crops was only available during the summer season. A balance was maintained between the precipitation and evapo-transpiration that kept the water-table low. With the introduction of perennial canals, water was available throughout the year resulting in a rise of the water-table. Salts in the soil also rise to the surface with the water-table.

The water on reaching the surface evaporates and the salts are deposited on the surface, rendering the land unsuitable for farming. The rise of the water-table to the surface level is called water logging and the appearance of salty patches is called salinity.

Ther is a scarce resource in Pakistan. Its storage, ibution and use have to be carefully managed in order me Water Accord was not followed resulting in disputes between the provinces and a decrease in the agricultural output. As Pakistan is predominancy an agricultural country, the scarcity of water resources may affect Pakistan's economy negatively. order to conserve the scarce water resources, the following steps should be taken; National priorities such as the maximisation of agricultural production should be considered with regard to the distribution of water between the provinces.

Sites for small dams should be developed to store surplus flow during the monsoon season. Small dams are more cost effective and produce quick results compared with large dams because they are constructed in a shorter period of time are cheaper to build and easy to maintain. In order to avoid water loss from unlined canals, a crash program should be launched to line the canals with cement. Fresh water sources like rivers and lakes should not be used as dumping sites of solid and liquid waste. Natural fresh water lakes should be conserved to develop local water sources.

In Sindh, the Manchar, Kinjhar and Haleji lakes are the worst affected by pollution. Ground water contamination should be prevented as far as possible by controlling the seepage of toxic waste into the ground. A public education and information programme should be launched to influence the attitudes of the people towards the need to conserve water because it is a diminishing natural resource. The media, NGOs and educational institutions should take part in this programme.

Types of Tube Wells and Design of Strainer for Tube Wells