Flow Characteristics in Side Channel Spillways:

Flow into the side channel might enter the trough on only one side in the case of a steep hillside location, or on both sides and over the end of the trough if it is located on a knoll or gently sloping abutment. 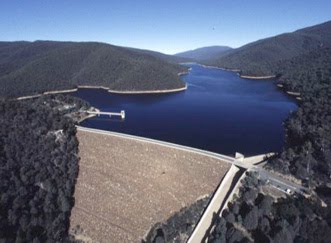 Discharge characteristics of a side channel spillway are similar to those of an ordinary overflow spillway and are dependent on the selected profile of the weir crest. However, for maximum discharges the side channel flow may differ from that of the overflow spillway in that the flow in the trough may be restricted and may partly submerge the flow over the crest. In this case the flow characteristics are controlled by a constriction in the channel downstream from the trough.

The constriction may be a point of critical flow in the channel, an orifice control, or a conduit or tunnel flowing full. Although the side channel is neither hydraulically efficient nor inexpensive, it has advantages that make it desirable for certain spillway layouts. Where a long overflow crest is needed to limit the surcharge head and the abutments are steep and precipitous, or where the control must be connected to a narrow discharge channel or tunnel, the side channel spillway is often the best choice.

The cross-sectional shape of the side channel trough will be influenced by the overflow crest on the one side and by the bank conditions on the opposite side. Because of turbulence and vibrations inherent in side channel flow, a side channel design is ordinarily not considered except where a competent foundation such as rock exists. The channel sides will, therefore, usually be a concrete lining placed on a slope and anchored directly to the rock.

A trapezoidal cross section is the one most often used for a side channel trough. The width of such a channel in relation to the depth should be considered. If the width to depth ratio is large, the depth of flow in the channel will be shallow, similar

A control section downstream from the side channel trough is achieved by constricting (Fluming) the channel sides or elevating (Raising) the channel bottom to produce a point of critical flow. Flows upstream from the control will be at the sub-critical stage and will provide a maximum of depth in the side channel trough. The side channel bottom and control dimensions are then selected so that flow in the trough opposite the crest will be at the greatest depth possible without submerging the flow over the crest. Flow in the discharge channel downstream from the control will be the same as that in an ordinary channel or chute spillway.

Variations in the design can be made by assuming different bottom widths, different channel slopes, and varying control sections. A proper and economical design can usually be achieved after comparing several alternatives.

Purpose Use of Cross Head Regulator

Khosla's Theory of Hydraulic Structures
How to Design Barrage