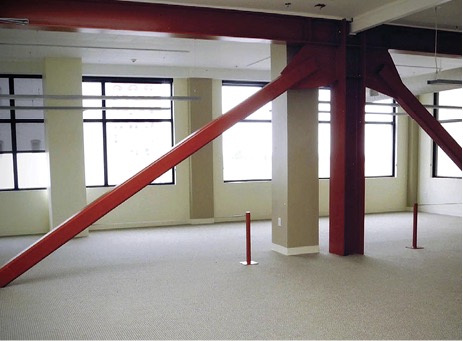 Thus, it is of critical importance that the structures that need seismic retrofitting are identified correctly, and an optimal retrofitting is conducted in a cost effective fashion. Once the decision is made, seismic retrofitting can be performed through several methods with various objectives such as increasing the load, deformation, and/or energy dissipation capacity of the structure Conventional as well as emerging retrofit methods are briefly presented in the following subsections. 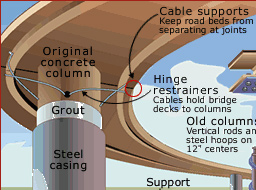 Current research on advanced materials in civil engineering is mainly concentrated on high performance concrete and steel, and fiber reinforced plastic (FRP) composites. FRP composite materials have experienced a continuous increase of use in structural strengthening and repair applications around the world in the last fifteen years. High specific stiffness and specific weight combined with superior environmental durability of these materials have made them a competing alternative to the conventional strengthening methods. It was shown through experimental and analytical studies that externally bonded FRP composites can be applied to various structural members including columns, beams, slabs, and walls to improve their structural performance such as stiffness, load carrying capacity, and ductility. FRP composites have enjoyed varying degrees of success in different types of applications.

In general, applications that allow complete wrapping of the member with FRP have proven to be effective. Wrapping of columns to increase their load and deformation capacity is the most effective and most commonly used method of retrofitting with composites. However, certain performance and failure mode issues regarding different wrapping configuration and fiber orientations, still need to be well understood. When wrapping is difficult or not allowed, such as when strengthening beams, slabs, or walls, success of the method is sometimes hindered by premature de-bonding failures.the performance of beams strengthened using pultruded FRP plates in various configurations.

Limited research and applications regarding seismic retrofitting of building systems with FRP composites have shown that composites retrofitting does not significantly alter the stiffness and dynamic properties of the building. The main benefit of retrofitting with composites is the increase in deformation capacity of the building, and in its load capacity to an extent. This may achieve the retrofit objectives for buildings with lightly insufficient seismic resistance. For buildings with large seismic deficiencies, a combination of conventional and FRP strengthening techniques may prove to be an effective retrofitting solution.

As a practical and economical solution, the retrofit design involved replacement of the existing window frames with structural steel frames constructed from steel C-sections. A verification analysis of the retrofitted building showed that installation of steel window frames largely decreased the stress concentrations, but did not suffice to reduce all stresses to acceptable levels. For this reason, additional retrofitting was designed using externally bonded FRP composites around the openings in the walls to prevent or delay concrete crack propagation by bridging the stresses at crack locations. Thus, by combining conventional and innovative materials, an effective and economical retrofit design was achieved that did not significantly interfere with the function or historical and architectural character of the building. FRP composites are widely recognized for their potential use in seismic retrofitting applications. To achieve wide-range use of these materials, however, there is need for further research into a number of issues related to mechanics, design, and durability of FRP retrofitted concrete and steel systems. Despite considerable progress in these areas since early last decade further improvements are necessary to meet the needs of the retrofit industry. Failure mechanisms, with emphasis on brittle shear and de bonding failures, must be thoroughly understood and associated design procedures must be incorporated in design codes.

Influence of cyclic and fatigue loading on the FRP strengthened member performance must be characterized and accounted for in the design process. Although FRP composites are known for their favorable durability characteristics, only limited information is available on long-term durability and performance of FRP bonded concrete and steel systems. These issues need to be investigated through accelerated test studies and related design, application and protection requirements must be included in the design codes.