It is defined as the transfer of liquid water into vapor state to the atmosphere. It involves the conversion of water from liquid to vapor state and then again return to the atmosphere in the form of liquid or solid precipitation that reaches the earth surface. The most important form of evaporation is probably that one which takes place from sea, ocean or other water surfaces.

Evaporation may also take place from bare soil surface but in a very small amount of total quantity. Evaporation causes cooling. Precipitation deposited on vegetation also evaporates reducing the quantity of water reaching the soil surface. Other evaporation mechanism to be considered is Transpiration by plants.

Process of evaporation - How Does Evaporations Work

Adding heat to water causes molecules to become increasingly energized and they start moving more rapidly, resulting in increase in distance between the liquid molecules and weakening of the forces between them.

At high temperature, therefore, more of the molecules near the water surface will tend to fly off into lower layers of the overlying air. At the same time, water vapor molecules in the lower air layers are also in continuous motion and some of them penetrate into underlying mass of water. Rate of 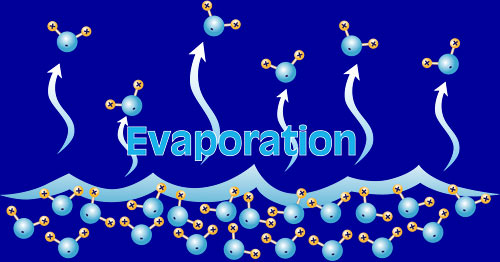 evaporation at any given time depends on number of molecules leaving the water surface minus the number of molecules returning to water surface due to condensation. Generally, evaporation from a given surface is greatest in warm, dry and windy condition and is least in humid and cold conditions. The saturation vapor pressure of water is high and when the air is dry, the actual water pressure of water is low.

In other words, in dry conditions, the saturation deficit (E-e) is large and vice versa. 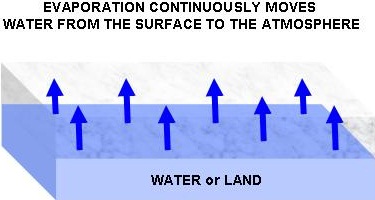 1. Meteorological factors are as follows: