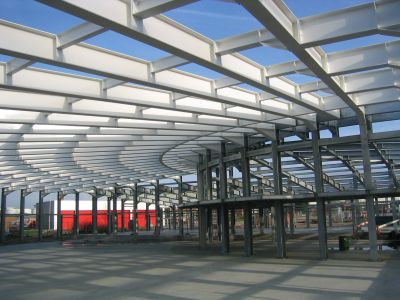 Topics to be studied and concepts to be learned

A condition beyond which a structural system or a structural component ceases to fulfill the function for which it is designed.

To overcome the above drawbacks, LRFD was evolved

Ability of a structure to go through in-elastic deformation without rupture.

It is the ability to resist abrasion.

Maximum load which an object can resist. OR it is the maximum load that the steel can resist before failure. Steel is said to be failed when it has yielded. It is thus called yield strength

Ability of a structure or structural component to absorb energy.

It is a progressive, localized permanent damage under fluctuating stress.

LRFD accounts for both variability in load and resistance. It achieves fairly uniform levels of safety for different limit states.

Resistance to deformation based upon:

Factors to be considered in the design of steel structures

Reserved strength must be available to cater for:

Goal is to prevent limit state from being reached.

If the structure is a building, for instance, the designer must create a plan that has suitable arrangement for rooms, corridors, stairways, windows, elevators, emergency exits etc and all this plan should be adapted to site so that it is feasible, accepted aesthetically and at a reasonable cost. This is called functional planning.

Once loads are defined and design is laid out, structural analysis must be performed to determine internal forces that will be produced in various members of the framework. Assumptions must be made and it should be ensured that structure in reality also behaves as it is supposed to (and as it was assumed to behave).

Members must be proportioned with factor of safety in mind.

The development of design specifications to provide suitable values of the margin of safety, reliability and probability of failure must take into consideration the following factors.

The design safety of structures may be evaluated in either of the two ways:

A. i Disadvantages of using ASD - Drawbacks of ASD method

Types of Steel Structures
Horizontal and Vertical Reinforcement in Walls