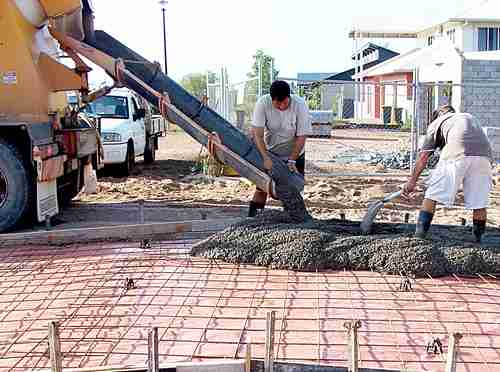 Transporting the concrete mix is defined as the transferring of concrete from the mixing plant to the construction site. The main objective in transporting concrete is to ensure that the water-cement ratio, slump or consistency, air content, and homogeneity are not modified from their intended states. Concrete produced from a mixer is required to be transported to the forms for placement. This handling may produce segregation and loss of slump, if the distance is long.

Methods of transporting and placing concrete which are used widely, are:

a. Direct Discharge, Manual Transport in Containers and short chutes

Cranes and cableway is use for three dimensional purpose of transport. It can be used in projects where concrete is to be transferred across a valley or some obstruction like a river, sea or road. Cranes can be used for various high rise buildings and many other type of constructions also.

Belt conveyor is used for very short distance, not for large distances

The buckets and skips are very common equipment. They are used together with many things. Some different types of buckets which are used in concrete transporting are:

Transportation of Concrete in Under Water Concreting:

Under water placing of concrete poses a number of problems, as concrete cannot be compacted and concrete may get mixed with water. Whenever, possible under water connecting is to be avoided. To overcome the problems mentioned above, concrete must be self compacting and wet enough to flow under its own weigh, and must be placed with least disturbances.

Methods of Transporting Concrete Under Water

Each of this method is used in different situation. First let look at buckets, buckets can be used through cranes and that sort of equipment. It is filled up from top and lifted off up, when its reach the ground where it is supposed to discharge, open the screws at the bottom, when buckets is lifted up more so the scot is actually on the ground and concrete is discharged with in scot which does not immediately come into water, this is one common way to use under water concrete.

The most common way to use concrete under water is tremie; this is done by tremie pipe. There are 2 retaining walls beside the tremie pipe. This pipe is made piece by piece, and concrete is discharged at the bottom. Only the cement of top surface will contact with water, rest of the concrete will not contact with the water. The other method which can be used for mixing and can transport over a large distance is through "ready mixed concrete". This is very much used where the area is congested and one cannot mix the concrete on site.

Effects of Aggregate Properties on Concrete