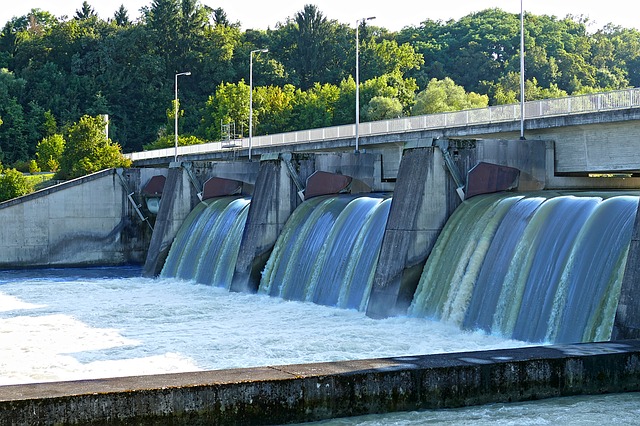 The only difference between a weir and a barrage is of gates, that is the flow in barrage is regulated by gates and that in weirs, by its crest height. Barrages are costlier than weirs.

Weirs and barrages are constructed mostly in plain areas. The heading up of water is affected by gates put across the river. The crest level in the barrage (top of solid obstruction) is kept at low level. During flood, gates are raised to clear of the high flood level. As a result there is less silting and provide better regulation and control than the weir.

Weirs are provided either with shutters or counter balanced gates to maintain pond level. A shuttered weir is relatively cheaper but locks in speed. Better control is possible in a gated weir (barrage). Their function is:

It is a long wall constructed at right angle to the weir axis. It is extended up to the upstream end of the canal head regulator. In case of one canal off-taking from each bank of the river, one divide-wall is provided on front of each of the head regulators of the off takes. Similarly on the d/s side it should extend to cover the hydraulic hump and the resulting turbulence. The main functions are as follows: 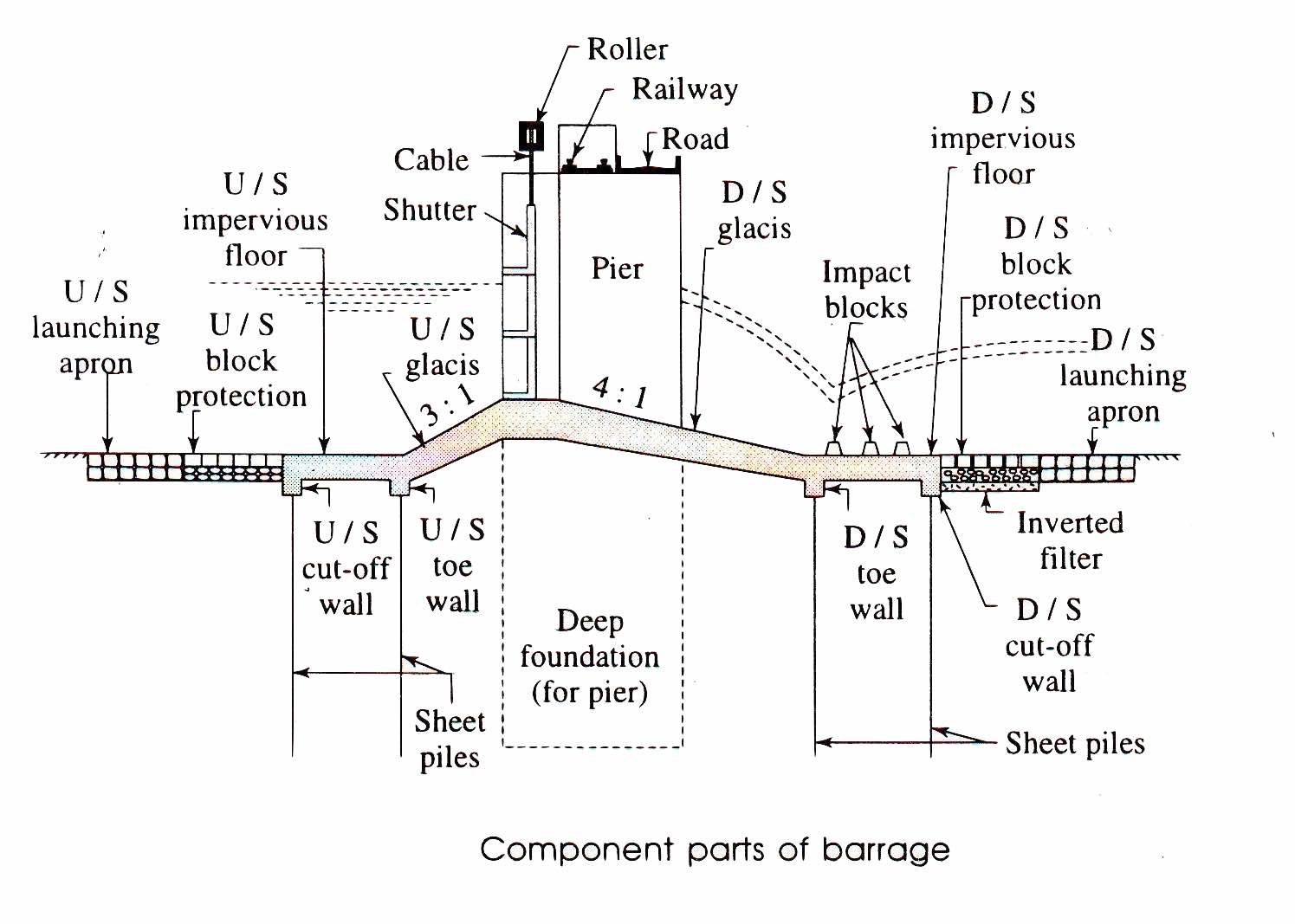 This can be at Maralam Qadirabad & Chashma barrages. Fish move from u/s to d/s in search of relatively warm water in the beginning of water and return u/s for clear water before the onset of monsoon.

Made of mild steel, each portion being 1.5' to 2' in width and 1/2" thick and of the required length, having groove to link with other sheet piles.

There are generally three or four sheet piles. From the functional point view, in a barrage, these are classified into three types:

Upstream sheet piles are located at the U/S end of the U/S concrete floor. These piles are driven into the soil beyond the maximum possible scour that may occur. Their functions are:29. To protect the barrage structure from scour. 30. To reduce uplift pressure in the barrage floor. 31. To hold the sand compacted and densified between two sheet piles in order to increase the bearing capacity when the barrage floor is defined as raft.

An inverted filter is provided between the d/s sheet piles and the flexible protection. It typically consists of 6” sand, 9’’ coarse sand and 9” gravel. The filter material may vary with the size of the particles forming river bed. It is protected by placing concrete blocks of sufficient weigh and size, over it.

Slits (jhiries) are left between the blocks to allow the water to escape. The length of the filter should be (2 × downstream depth of sheet pile). It performs following functions:

A flexible apron is placed d/s of the filter of the filter and consists of boulders large enough not to be washed away by the highest likely water velocity. The protection is enough as to cover the slope of scour depth i.e. (112 × depth of scour on u/s side) and (2 × scour depth on the d/s side) at a slope of 31.

Under sluice is the opening at low level in the part of barrage which is adjacent to the off takes. These openings are controlled by gates. They form the d/s end of the still ponds bounded on two sides of divide-wall and canal head regulator.

They perform the following functions:

Purpose Use of Cross Head Regulator

Freeboard - Types, Determination & Uses of Freeboard in Dams
How to Design Barrage
River Training Works and other Definitions