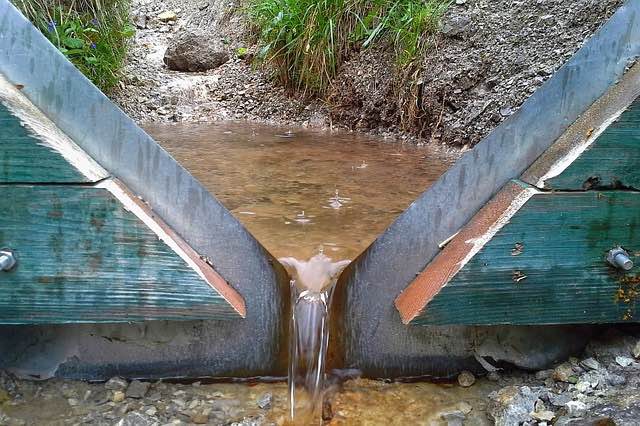 "Spillways are structures constructed to provide safe release of flood waters from a dam to a downstream area".

Every reservoir has a certain capacity to store water. If the reservoir is full and flood water enters it, the reservoir level will go up and may eventually result in over-topping of the dam. To avoid this situation, the flood has to be passed on to the downstream and this is done by providing a spillway which draws water from the top of the reservoir. A spillway can be a part of the dam or separate from it.

Spillways can be controlled or uncontrolled. A controlled spillway is provided with gates which can be raised or lowered. Controlled spillways have certain advantages. When a reservoir is full, its water level will be the same as the crest level of the spillway. 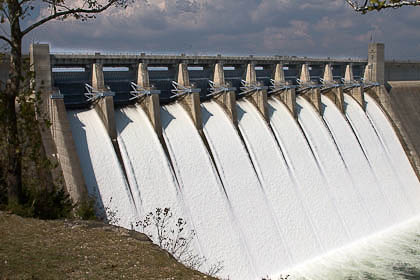 There are different types of spillways that can be provided depending on the suitability of site and other parameters. Generally a spillway consists of a control structure, a conveyance channel and a terminal structure, but the former two may be combined in the same for certain types. The more common types are briefly described below:

The Ogee spillway is generally provided in rigid dams and forms a part of the main dam itself if sufficient length is available. The crest of the spillway is shaped to conform to the lower nappe of a water sheet flowing over an aerated sharp crested weir.

When the actual head becomes more than the designed head, the lower nappe does not follow the ogee profile and gets separated from the spillway surface. Thus a negative pressure develops at the point of separation. Due to the negative pressure, air bubbles are formed within the flowing water. These air bubbles air responsible for the frictional force (i.e. abrasion) which causes much damage to the spillway surface. Again, if the head of water is less than the designed head, the waterjet adheres to the body of the spillway and creases positive pressure which reduces the discharge through the spillway.

In this type of spillway, the water, after flowing over a short crest or other kind of control structure, is carried by an open channel (called the "chute" or "trough") to the downstream side of the river. The control structure is generally normal to the conveyance channel. The channel is constructed in excavation with stable side slopes and invariably lined. The flow through the channel is super-critical. The spillway can be provided close to the dam or at a suitable saddle away from the dam where site conditions permit.

Side channel spillways are located just upstream and to the side of the dam. The water after flowing over a crest enters a side channel which is nearly parallel to the crest. This is then carried by a chute to the downstream side. Sometimes a tunnel may be used instead of a chute.

This type of spillway utilizes a crest circular in plan, the flow over which is carried by a vertical or sloping tunnel on to a horizontal tunnel nearly at the stream bed level and eventually to the downstream side. The diversion tunnels constructed during the dam construction can be used as the horizontal conduit in many cases.

As the name indicates, this spillway works on the principle of a siphon. A hood provided over a conventional spillway forms a conduit. With the rise in reservoir level water starts flowing over the crest as in an "ogee" spillway. The flowing water however, entrains air and once all the air in the crest area is removed, siphon action starts. Under this condition, the discharge takes place at a much larger head. The spillway thus has a larger discharging capacity. The inlet end of the hood is generally kept below the reservoir level to prevent floating debris from entering the conduit. This may cause the reservoir to be drawn down below the normal level before the siphon action breaks and therefore arrangement for de-priming the siphon at the normal reservoir level is provided.

Advantages and Disadvantages of Hydropower Plants
How to Design Dams