The structure used to retain or support the material/soil is called retaining structure. e,g retaining walls, which may be of RCC, brick or stone masonry or sheet piling etc

A retaining wall is a structure designed to sustain the material pressure of earth or other materials as grains, ores, etc

The material which lie above the horizontal level of the retaining structure is known as surcharge. The angle which this material makes with the retaining wall is called surcharge angle.

In 1929 Terzaghi (The Father of Soil Mechanics) conducted experiments on the retaining wall and showed the relation of pressure on the wall if wall changes its position i.e to move inwards to the backfill, outwards of it or remain at its place. There are three types of earth pressures on the basis of the movement of the wall.

These are explained below 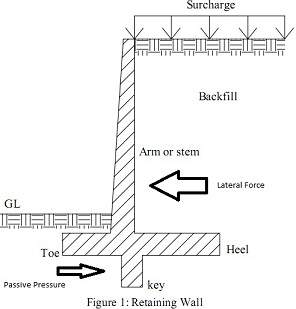 When the wall is at rest and the material is in its natural state then the pressure applied by material is known as Earth Pressure at Rest. It is represented by Po.

When the wall moves away from the backfill, there is a decrease in the pressure on the wall and this decrease continues untill a minimum value is reaceh after which their is no reduction in the pressre and the value will become constant. This kind of pressure is known as active earth pressure.

This means that when the wall is about to slip due to lateral thrust from the backfill, a resistive force is applied by the soil in front of the wall.

On a small unit at depth Z in the back there are two kinds of pressure.