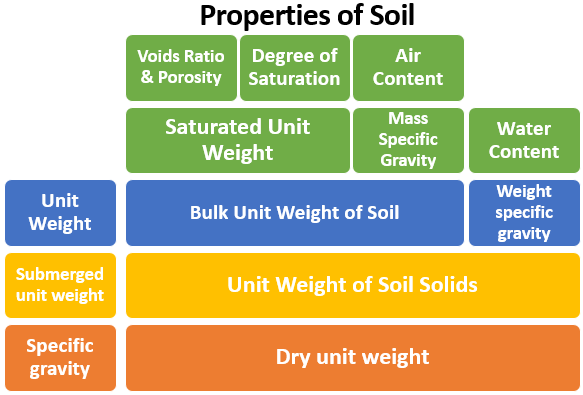 It is defined as “The ratio of the volume of voids to the total volume of soil sample". It is denoted by “n”

It is expressed in percentage and is also known as Percent Saturation. In a fully saturated sample;

The degree of saturation, S, has an important influence on the soil behavior. It is defined as the ratio of the volume of water to the volume of voids.

It is denoted by w

The moisture content, m, is a very useful quantity because it is simple to measure. It is defined as the ratio of the weight of water to the weight of solid material. The water content (also known as moisture content) test is probably the most common and simplest type of laboratory test. This test can be performed on disturbed or undisturbed soil specimens.

It is expressed in

It is sometimes called Unit Weight only. It is the ratio of the total weight of soil to the total volume of soil.

It is also called Moist Unit Weight. The weight of the aggregate that fills a 1-cubic-foot container. This term is used because the volume contains both aggregate and voids air spaces.

The total unit weight (also known as the wet unit weight) should only be obtained from undisturbed soil specimens, such as those extruded from Shelby tubes or on undisturbed block samples obtained from test pits and trenches. The first step in the laboratory testing is to determine the wet density, defined as _t _ M/V, where M _ total mass of the soil, which is the sum of the mass of water (Mw) and mass of solids (Ms), and V _ total volume of the soil

When all the voids of soil are filled with air it is called Dry Soil and Unit Weight as Dry Unit Weight e.g. Oven Dried Soil in Laboratory

According to the Archimedes’ Principle;

It is defined as “the ratio of the density of soil sample to the density of water at standard temperature and pressure i.e. 4°C and 1 atm or 101.325 kPa

If you haven't found what you were looking for on this page, fill the form below to tell us what you need to know about constituents and properties of soil