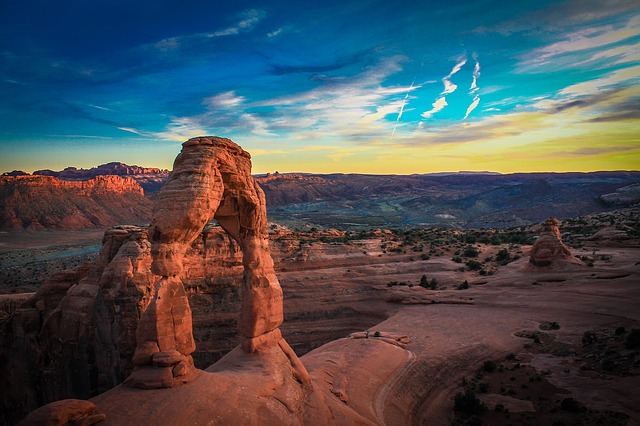 It is a natural process of breaking down of rocks, and minerals as well as artificial materials due to its prolonged exposure to the environment. These particles when moved away by gravity, water, ice, wind etc is then known as erosion. In short, when a particle is loosened by a chemical or physical process, but does not move, it is called Weathering. When the particle moves, it is called Erosion. It is a general term and applied to the combine action of all processes causing rocks disintegration physically and decomposition chemically.

It is the process of weakening rock and producing a rock waste or soil cover. Weathering occurs when rocks and minerals comes in contact with the atmosphere, organic life and suicidal water. Essential feature of weathering is that it affects rocks in-situ (in place) and no transportation of material is involved.

Factors affecting Weathering of rocks are:

Rock weathering is greatly affected by the following parameters.

Depending upon the mechanism and causes, weathering can be divided into three broad categories

In the mechanical disintegration and breaking of the rocks to form particles of smaller size. In physical weathering, the composition of the weathered products remains unchanged. Physical Weathering also known as Mechanical Weathering may occur due to the following reasons:

The moisture or water penetrated into cracks when freezes, it expands causing stresses and breaking of rock. Freezing of water in the cracks of rocks tends to disintegrate them because volume of water increases 1-11 times of its actual volume. It exerts a great pressure on the wall having cracks. By this process, angular fragments of rocks are broken off from the main body of the rock, causing physical weathering.

When some of the material is removed from the surface, the load is reduced and the underlying body expands up causing cracking.

Water from power full waves when strike against the rock causes erosion.

When saline solutions seep into cracks and joints in the rocks and evaporate it leaves salt crystals behind. These salt crystals expand as they are heated up thus exerting pressure on the confining rock. In Physical Weathering the broken down particles have same properties as the parent material.

Plants and insects like earthworms, ants, termites and snakes play an important role in physical weathering because they convert rock into soil to get their food. Plants also grow in joints and cracks of the rocks and push them further apart. Similarly, man also breaks rocks by making roads, constructing dams and reservoirs by drawing tunnels and mines etc.

In this process rock minerals absorb water and expand, creating stress which causes the disintegration of rocks.

In this process a chemical reaction takes place between the minerals (Silicates and Carbonates) in the rock and Hydrogen (H+) in rain water.

In this process oxygen combine with water and minerals in the rock such as iron, calcium and magnesium to form their oxides. When iron reacts with oxygen, reddish-brown iron oxide is formed. The iron-oxide crust crumbles easily and weakens the rock. This process is commonly known as Rusting

It is the breakdown of the rock by physical or mechanical forces.

water enters cracks and expands on freezing, pressure splits rock. alternate freezing and thawing of water in fractures and cracks promotes the disintegration of rocks (water expands about 9% upon freezing)

Minerals in the parent rock are unchanged

Result is a primary rock mineral, which is the constituent of most sands & gravels

Weathering of rock is a complex process and depends on many factors including: