This is a hypothetical Live Load Model proposed by AASHTO for analysis of bridges. Reason for proposing this live load model is to prescribe a set of loads such that it produces extreme load effect approximately same as that produced by the exclusion vehicles. Exclusion vehicles were the vehicles above the legal limit but due to grand fathering provision in the state they were allowed to operate routinely.

It has 3 basic Live Loads for bridges called HL-93 Loading (where H stands for highway and L stands for Loading, developed in 1993). 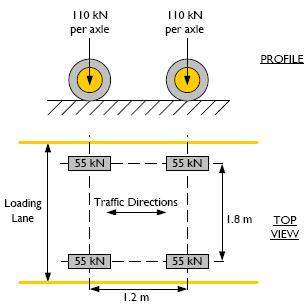